You asked for it, and this is the abbreviated version!

I’m assuming that you have setup the basics on the KK board (such as motor layout, receiver inputs going the right way and the right amount, and that you have the self-level setting put on an aux switch on the TX. I would link the pitch and roll settings to begin with too. Start with a little bit of expo on the elevator and aileron in your TX. If you need any help on those bits, let me know).

It is important to tune the KK flight controller one step at a time. First do the Pitch and Roll (these will normally be linked for symmetrical quad). Then do the Yaw. Then do the self level.

So, with a fresh battery in the quad, go into the PI editor section in the KK menu, and reduce the I gain for pitch, and roll, to zero. Leave the P gain, P limit, I limit as they are. Now arm the quad, and put in rate mode (NOT self-level). Take off into a hover. Now give the aileron stick a sharp nudge, then back to centre. You are looking for the quad to respond to a “step” or sharp input without any great deal of sluggishness, but have no oscillation when the stick is returned to centre. Be aware that the response might be quite gentle, we’ll tune that in a bit. Now if the quad is really slow to respond, you can increase the P gain setting (leaving P limit and I gain and I limit alone for now). Keep test hovering and increasing the P gain, until you get a fast oscillation when the tx stick is returned to centre. This is a sign that the P gain is too high, so you can back it off until the oscillation is minimised. The actual P gain setting is not important, the flight performance is. You can fly with the P gain set anywhere between the too sluggish and to wobbley setting. I prefer the higher end, as it responds quicker for aerobatics/evasive manoeuvres.

With the I gain set to zero, you should find that if you put some elevator (or aileron) in to get forward (or sideways) motion, it will want to gently come to a halt. It will feel a bit mushy when flying anything other than a hover. This is where the I gain setting comes in. So, once you are happy with the P gain setting, go back into the PI editor, and set the I gain to approximately half of what you have on the P gain (e.g. if P gain is 50, set the I gain to 25). Leave the P limit and I limit alone. Now test fly again (in rate mode still) by flying forward, and then centring the stick. The quad should carry on holding the pitch or bank angle it started with. If it starts to level itself, or feels a bit “mushy”, then you can increase the I gain. Keep increasing until you are happy. If you increase too much, you may notice that instead of it holding the pitch angle, the angle may start to increase (over correct), or even start to oscillate.

Now to the yaw setting. Again, set the I gain to zero, and test hover in rate mode. Increase the P gain until you get a nice response, with no oscillation. You may get no oscillation at all, no matter how high you go. Generally I increase this setting until the yaw response feels nice, and leave it there. Now do the same as the pitch and roll, and set the I gain to half of the P gain. The I gain has very little effect on the yaw axis, but again, you can increase it to get a nice crisp start and stop to a yaw.

You should now have a quad that flies nice in Rate mode. You can now start messing around with the stick scaling settings on the KK, and your dual rates/expo settings on your tx. Out of the box, the response on a little 250 sized airframe will be fairly gentle. Basically increase the stick scaling until you get the rotation rates you want (higher numbers = higher rotation speeds in degrees per second). I tend to increase the stick scaling a fair bit, and then soften up the response around the hover by using lots of expo. I also have a high rate and low rate in the tx, one for cruising around, the other for aerobatics. You can set up your tx rates/expo as you see fit though. Oh and DON’T change the throttle setting. Leave it at 90 as any higher and the motors wont have any headroom for correcting disturbances during full throttle manoeuvres.

There should be no need to alter any of the other settings (P limit and I limit, and some of the other misc settings), unless you are getting some very specific problems. I’ll keep quiet about them though, to save confusion. And space on the interweb. For info though, the P and I limits are the effectively the motor power (in %) used to apply the corrections determined by the P and I gains).

Oh yes. Self-levelling settings. Whilst hovering, switch in to self-level mode. The quad should now hold level (assuming you have calibrated your ACC settings on a proper flat horizontal surface). It might drift with the wind a bit. With these settings, you can increase the self level P gain until you get some oscillation. Back it off a little. The P limit should be left as is. The ACC trims shouldn’t really be needed if you have done a proper calibration of the Acc in the first place, but you might need to use them if the KK board is not mounted level.

Done! Hope that helps. It should take you a few battery packs to get homed in on these settings. My hex took me about 5 packs to get it tuned nicely (and about 20 packs getting nowhere before I started following a proper process to tuning, as above!).

Mine so far, Im at a stop due to lack of 2mm female conectors, the right lengh standoffs for the KK, props, and male male leads 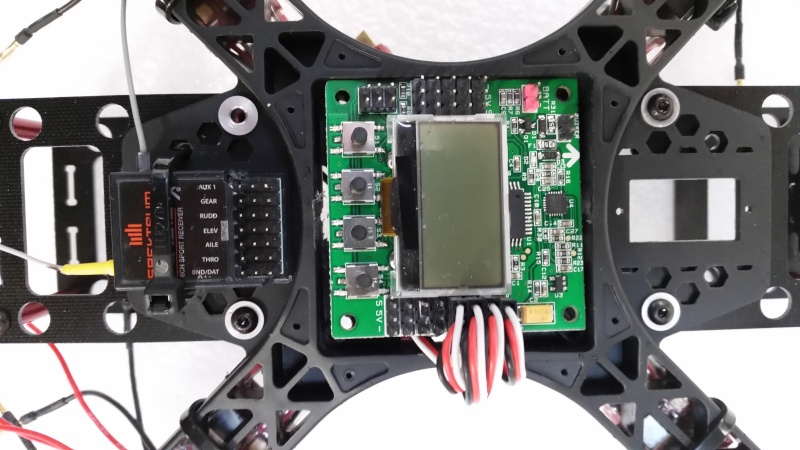 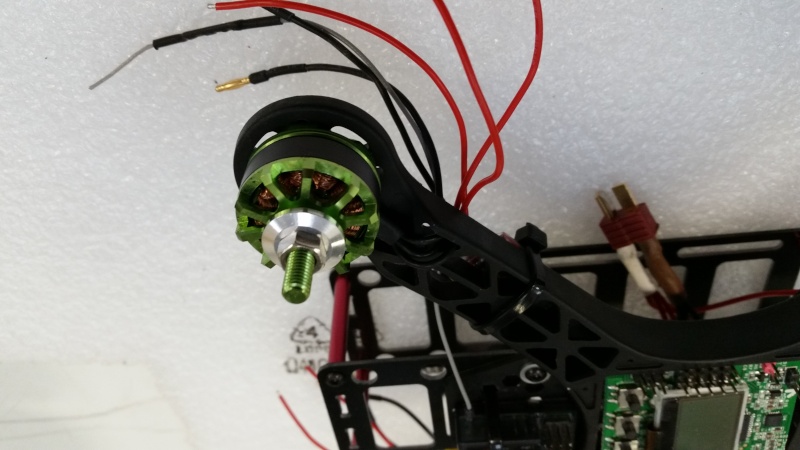 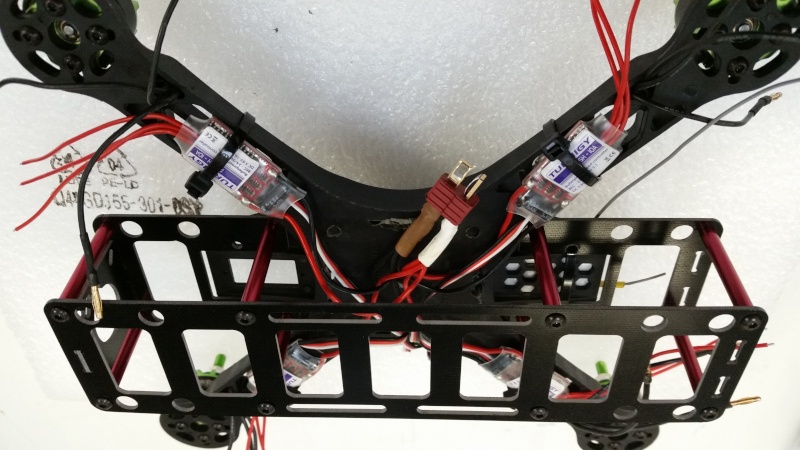 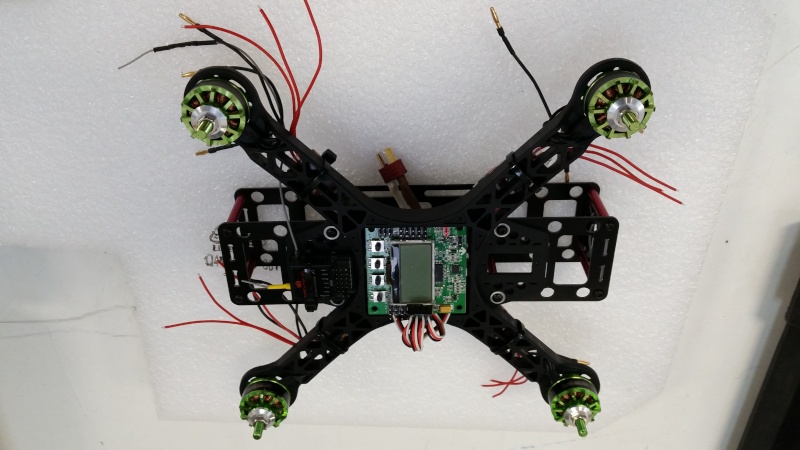 Use PPM and you only need one Male-male lead! Genius!

You know where to find some

Here's a couple of pics of mine so far. 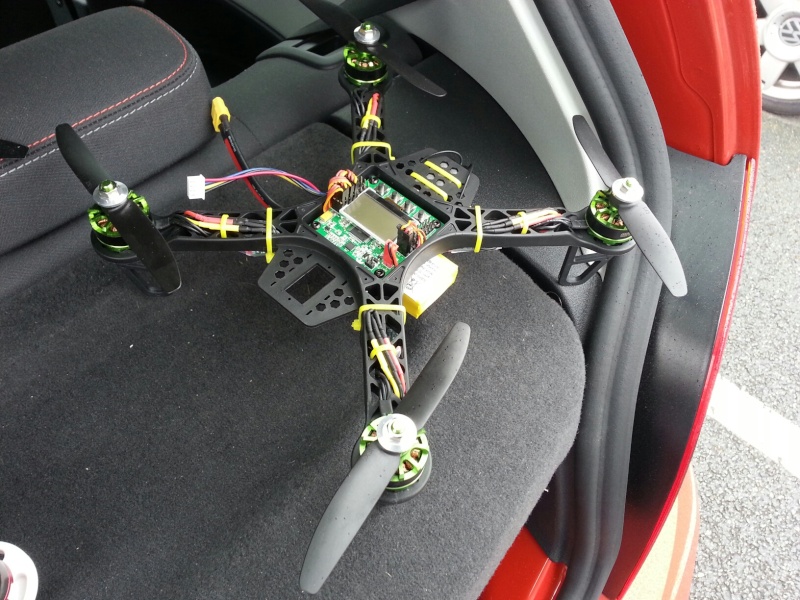 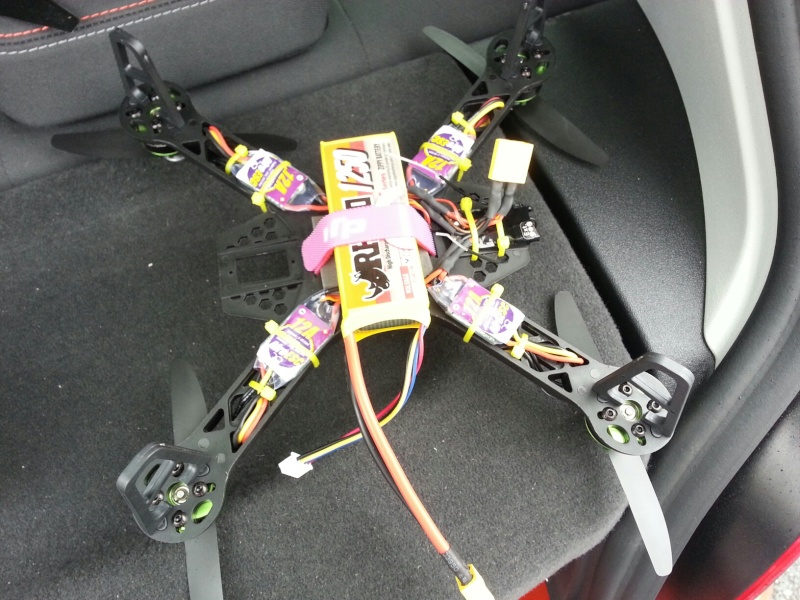 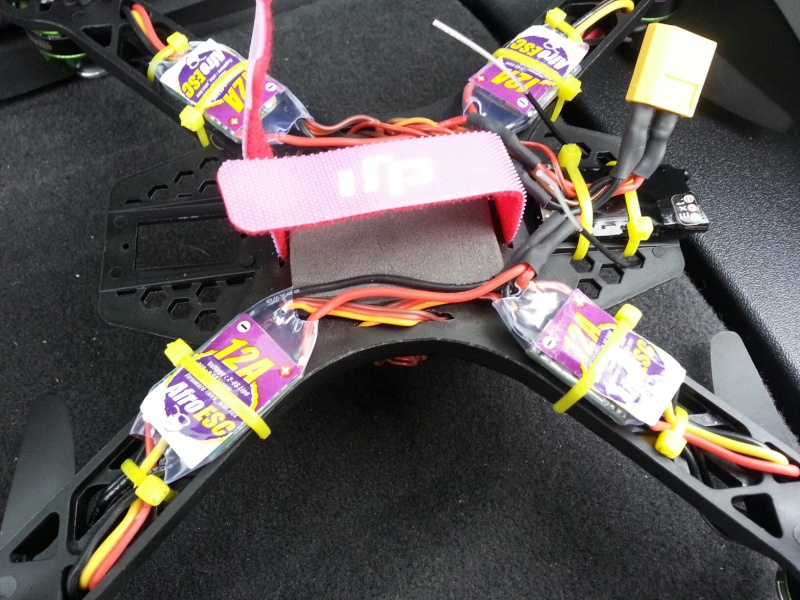 Notice the Afro Escs.  I was having a bit of an issue with one of the plush escs, where it was reacting sluggishly, causing an uncommanded tip and tilt when climbing or descending.  It could possibly be a setting that I haven't heard about, but recalibrating it didn't help.  I'll try again this evening when I have the full instructions to hand.

So far the test flying is going well.  The little airframes are a lot less sensitive to gain setting changes.  Mine flies not too bad with the default settings on the KK board, although the stick scaling is in need of a big increase. I need to add some colour to the airframe for LOS flying, it is a pig to orientate in the air. Flying FPV will remove that issue completely though...

They are going to be mental flown in an enclosed space!  And I foresee lots of prop breakages (but hopefully not airframe breakages!)
Andy
_________________
Chicks dig slop free linkages....

Motors and fpv gear arrived today just need lipos and time to put it together!

Its supposed to be first indoor meet of the season tomorrow night
_________________
The best pilots are the ones that practice most!

Soldered 4 out of 4 motors the wrong way round #winning 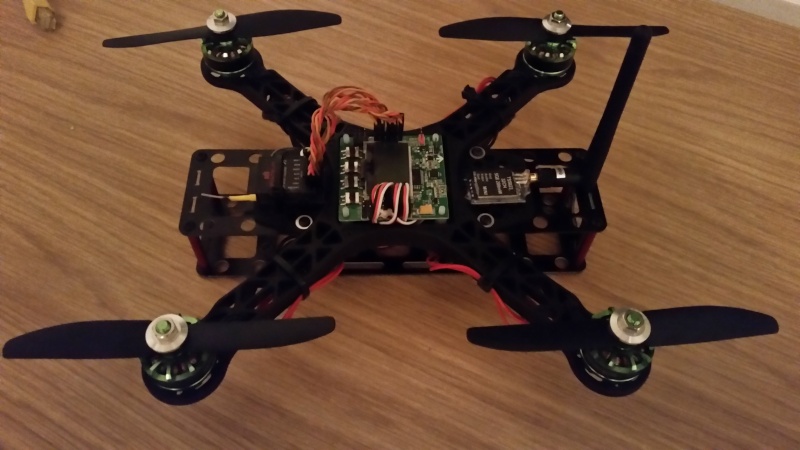 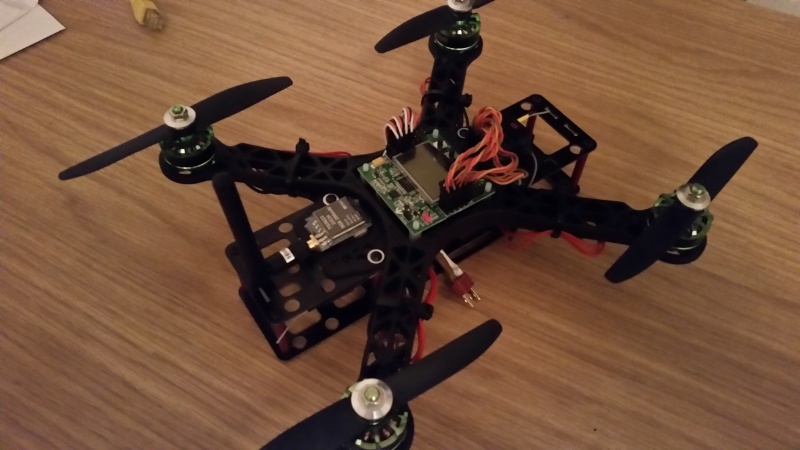 Prop nuts. I've got a bit of anti tamper seal on mine to stop them loosening. It's a bit like nail varnish that is applied to the nut/thread after tightening them up. I do wonder about getting some of them aerotight nuts though. You know the ones that have metal bits at the top that are spring loaded to act like a nyloc, but are reusable.

Anyone got a motor in front of them and know what the thread is? I might have some here....

Will check today then, and grab a handful if I have any. If not, I know I have a stack of nyloc M5 nuts, they are the wheel nuts on my little truck...

we have at least one flight each tonight 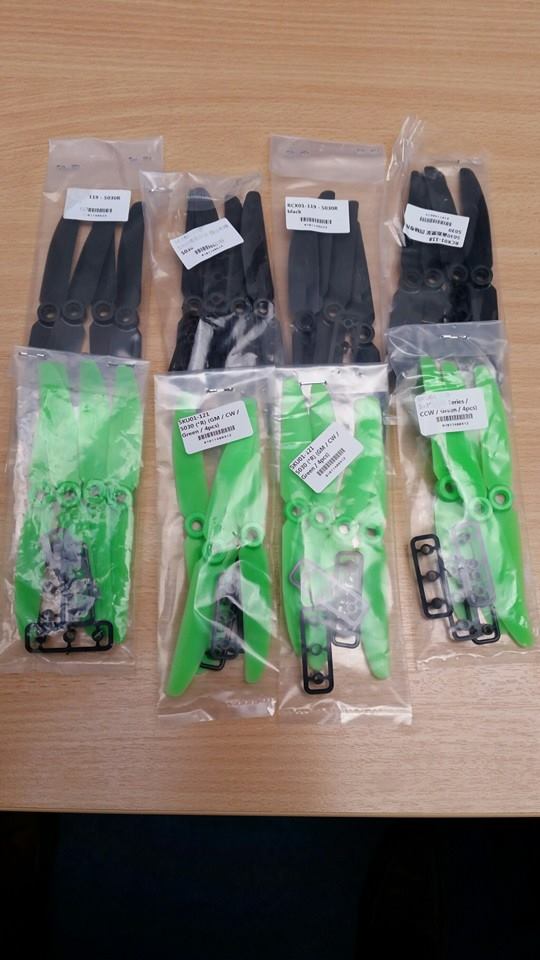 I've had some more test flights this lunchtime, and I've got the settings there or thereabouts. I can't quite get the balance between good response and no wobbles in self level mode, but it is flying nice enough to try circuits and flips/rolls etc.

I can report that the 5x3 prop is going to be bang on for FPV use on 3s packs around 1000mAh. However, I think the 5x4 props or possibly the 6x3 props are going to be the ones for flying aerobatics. Or 4s packs.

With 5x3 props and a 1000mAh pack, I am getting a good 6 minutes of flight time (plus some reserve). I can also report that I am probably not going to have the reactions required to race flat out indoors! It is a bit nippy