Ok mate,
The tail setup is the most critical part of a heli's electronics.
Other parts of the heli you can get away with cheaper servos and still have good performance.The tail servo however needs to be the fastest servo you can afford.
Don't worry too much about torque because most tail servos give anything from 2kg upwards for nitros.
I would say a minimum speed of 0.09 is required.I usually use servos with a speed of around 0.05.
The reason for the speed is because of the gyro.For example,

If your tail kicks in one direction the gyro tells the servo to "get back here".If you have a slow servo then no matter how fast your gyro can react,it won't be able to correct it instantly.
If your servo is blisteringly fast then the gyro can correct that tail instantly,letting you concentrate on the hovering.In a side wind during the hover the tail will be wanting to move but the gyro won't let it.
When you have a really fast servo it will keep correcting the wind so fast you won't see the tail jitter or move.
With a slow servo in the same side wind you will see the tail move slowly back and forth trying to correct it.

The best tail servos I have used are,

JR 8900 This is an awesome servo and has a speed of 0.05 and costs anywhere between £90 and £140.
Align 650 This is the best of the cheaper servos with a speed of 0.048 and can also run fine on 6 volts.Around £45
Futaba 9254 which you've used.At one time this was the servo to have and was highly praised.It's still a good servo but has been out for about 10 years and there is much better servo's out now.costs around £68 now.
Futaba bls251 This is another great servo that costs around £100 and is brushless.The only down side to this is it uses a specific pulse width that requires one of the latest gyro's to operate.

There are many others out there but these are ones I know are good from using them.
My favourite is the 8900 and is very hard to beat.The only other one that is even better is the new JR890 brushless which looks soooo nice,but at around £150 I don't plan on using one anytime soon.

I hope this was useful.If you see any other servo's that you aren't sure about just let me know and I'll take a look.
If you've got any other questions fire away.

Check with Doctor Dan first, but you should one of them in line to your tail servo if you are using lipos !

Thank you Rich.
The link that Zaide posted is a very handy little reg,and at under 5 quid is worth having one in the pit box just in case.I'll check out the regulator you're using to make sure it's suitable.
You mentioned in the other thread that the one you're using is a 4.8v one.This should be fine.

Blimey, someone is making a barrel of cash on thos regulators. All they are is a beefy (3A or so) silicon diode or two, connected in the positive line of a smalle extension lead!

You can pick the diodes up from Maplin for less than a quid each (even less if you buy from somewhere like RS components.... 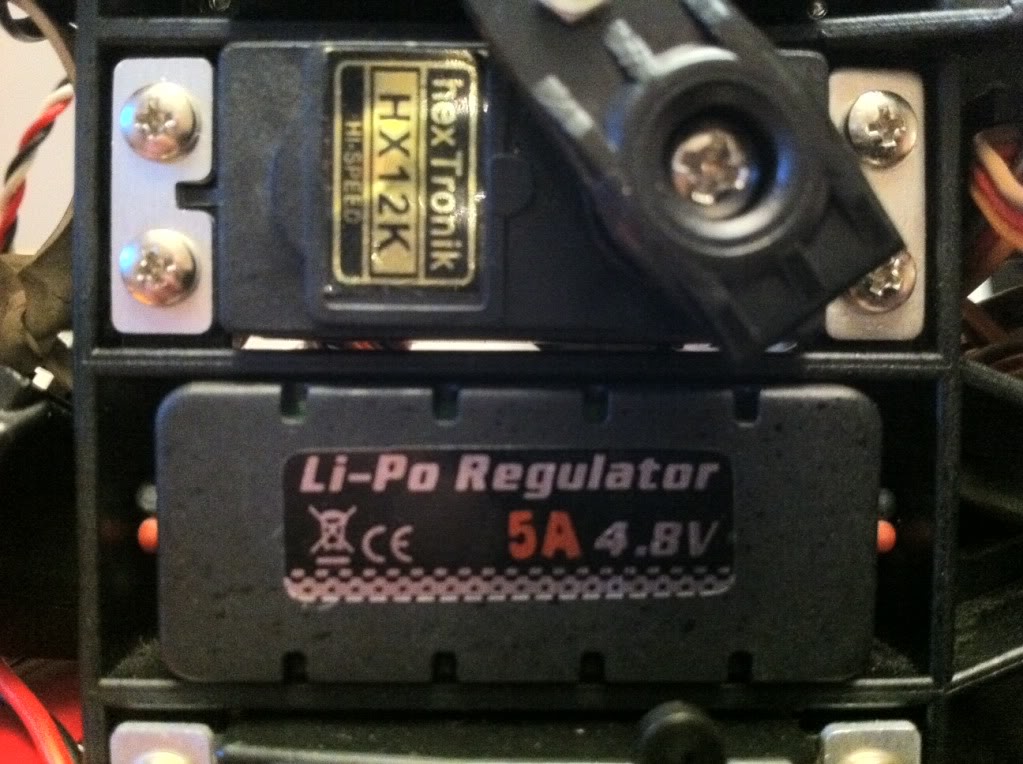 looks fine in there.
Just to clarify do you have the regulator plugged in between the lipo and the receiver so as to regulate all channels?

Yes it is plugged in between lipo and receiver

Checked the volts on the regulator from lipo and going into reg
7.4v coming out 7.01v no load 6.99 with load should't it be 4.8
Have I got a duff regulator?
Can anybody tell me is the red block from the lipo male or female

IF it's none adjustable it would appear so Andy.

Some regulators are simple and drop volts by a fixed amount,not to a pre determined voltage.
For example the little £5 one that Zaide posted a link to drops it by 0.9v.
This means that 6 volts becomes 5.1 and 8 volts becomes 7.1.
It could either be faulty or just a cheap one.Hopefully Andy will share some thoughts.

If it was me I would get a different reg as there are loads on the Market.The Align 2 in 1 is hard to beat for functionality as it is also a push button glow start.I've got one on my 600nsp which works well,but the wiring on it is a little thin,but I've not had problems with it.

The ones I like best are the Arizona perfect regulators range,but they aren't cheap.
You could also just use a decent size nimh receiver battery which would do away with the reg.
It's worth noting that if you go with a 5 cell pack then you need to pop one of those little reg's that Zaide posted onto the tail servo if it's only rated at 4.8v.

Are you able to post the make and model of your current regulator so I can look into it a bit,see if it's knackered or just unsuitable?

Oops I made an error there,I just looked at your picture of the reg and it say's 4.8v which means it's faulty and not adjustable.

I just thought I'd ask a silly question but can you confirm it's a 2 cell lipo and not a 3 cell?

If you decide on a new reg,just pop it on this thread whichever one you decide on.
If it's something anyone on here has used they may have good or bad experiences worth sharing.

When I set my heli up all the IC helis needed a fairly hefty pack hung on the nose of the heli to get the C/G right so why go lipos? Have the configuration of the helis changed. If you need weight on the front I'd rather go with a 4 cell sub "C" pack stay 4.8V and negate the need for voltage reg/s, keep it simple no need for all the whistles and bells at the learning stage far better to have reliability

Most of the current heli's do seem to have been designed with lipos in mind.
C of g on all mine would become nose heavy with a heavier pack in there.
The Align's are a good example as they come with the reg combo and lipo.The lipo is absolutely puny at only 1900mah and is only good for 3 or 4 flights.
Heli's now also have moved everything forwards and upwards for a high c of g with the lipos going on top of battery trays.

Both my 600's have perfect c of g but my 700 is actually nose heavy with the battery all the way back.
I've simplified everything in it with no reg,no governor and 8v servos and still it's nose heavy.

Andy's raptor though was designed before lipo's so it would be easier to go 4 cell nimh.
There's probably tons of room under that canopy as well so you could probably get 4000ish size packs in there.

I have a lipo in my raptor, and the tail servo on the boom which does make it a bit tail heavy - as for battery space - you could fit a house brick under the raptor canopy!

Stubbsy wrote:I have a lipo in my raptor, and the tail servo on the boom which does make it a bit tail heavy - as for battery space - you could fit a house brick under the raptor canopy!

What size lipo you got in there flower?

looks like the reg is the problem no wonder the heli has been a bit twitchy been looking at the Align 2 in1 and others but their outputs are 5.8v is this to much for 4.8v servo?
my lipo is a 2s 7.4v 2200 mah
the raptors are tail heavy but mine fly's with 4 balls and rods tied to it making it very nose heavy and the servo take a bit of power

If you want to continue with the lipo and reg setup,the Align giving 6 volts is fine.
All you need to do is get one of those little inline reg's that Zaide posted.They aren't a regulator as such,you basically plug it inline between the gyro and the tail servo and away you go.

It's a very simple setup and works well.
Richie is correct about the female plug usually being on the battery.This is because if you use male ones on the battery it is much easier to accidentally short the battery with the pins exposed.

Have you decided on a tail servo to replace the old one?

If that works I will go for the Align 2in1 and inline reg
Not sure on the servo yet useing a hextronik bit slow 0.19
But have used it before, don't wont to fit £80 servo until
I'am sure on the power setup

Andy Fisher wrote:looks like the reg is the problem no wonder the heli has been a bit twitchy been looking at the Align 2 in1 and others but their outputs are 5.8v is this to much for 4.8v servo?
my lipo is a 2s 7.4v 2200 mah
the raptors are tail heavy but mine fly's with 4 balls and rods tied to it making it very nose heavy and the servo take a bit of power

Andy the C/G on most helis is on or around the mainshaft, certainly for novice and average pilots not plumbing the depths of 3D flight, so your training undercarriage will make little or no difference to the balance as it's mounted pretty symmetrically around the C/G. I know you will get "marginally more power" from your servos on the slightly higher voltage but with the higher voltage you get less battery duration. Sometimes faster and more powerful servos are not good for a novice pilot looking for less twitchy performance. JMHO

Inline regulator = couple of 3A diodes from Maplins for a few quid.
Or even free from my bits box