Well I figured I'd get started on this thread.
I've almost got everything ready to start this build.Just waiting for reciever,2 servos and a couple more upgrades. 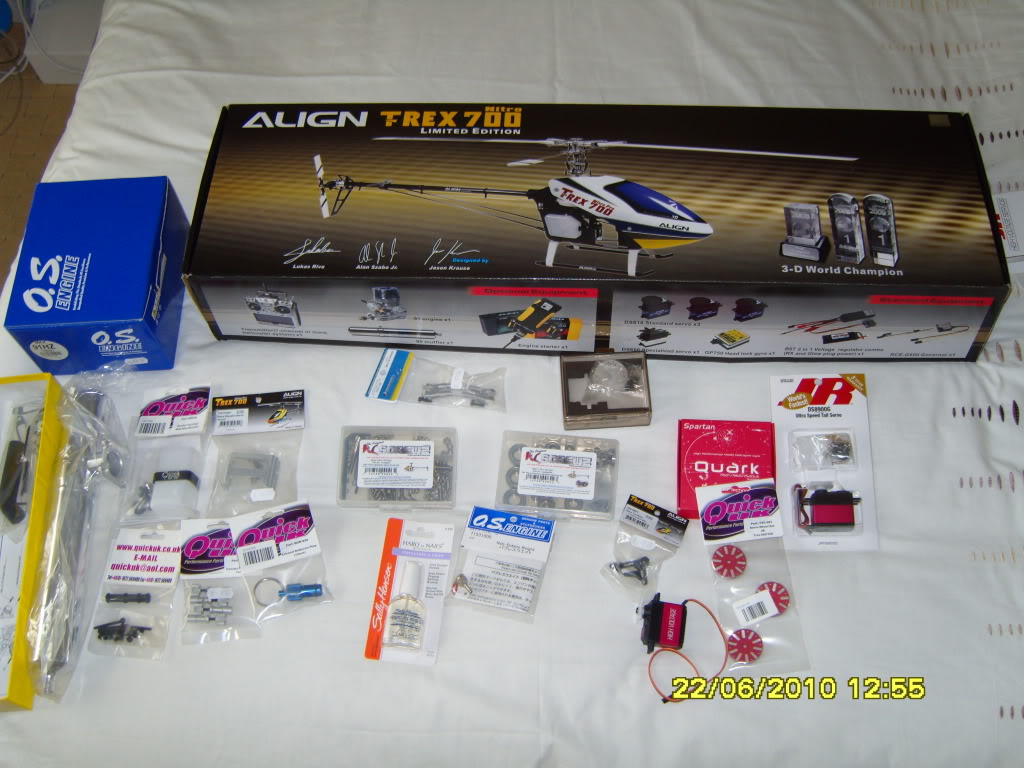 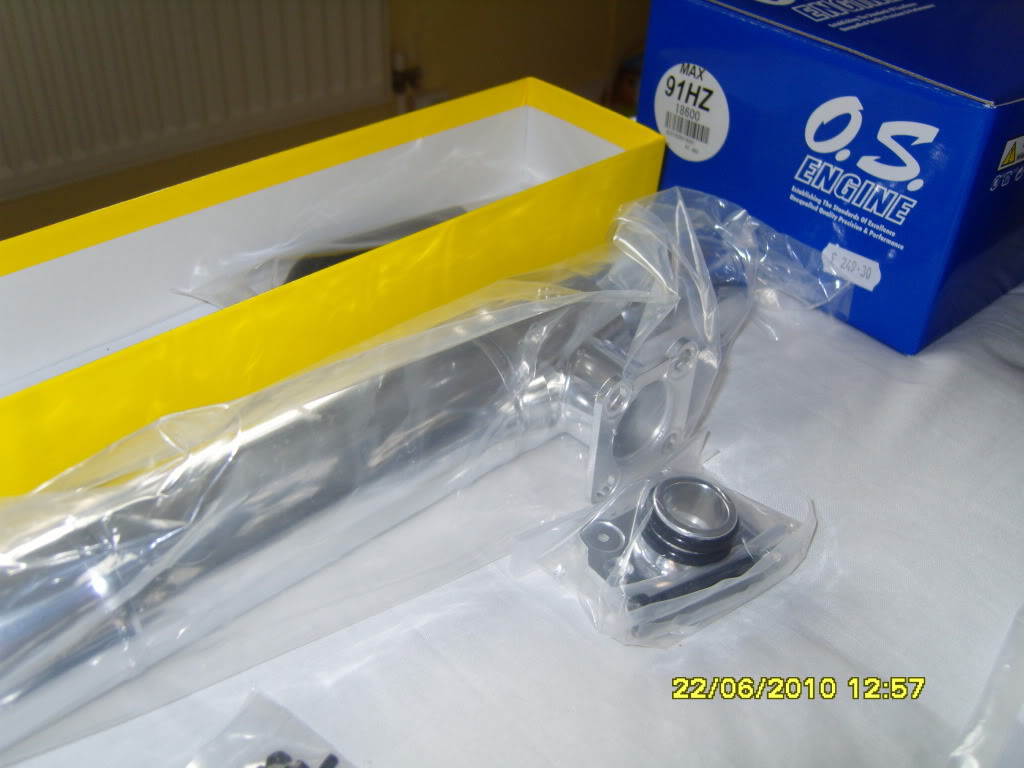 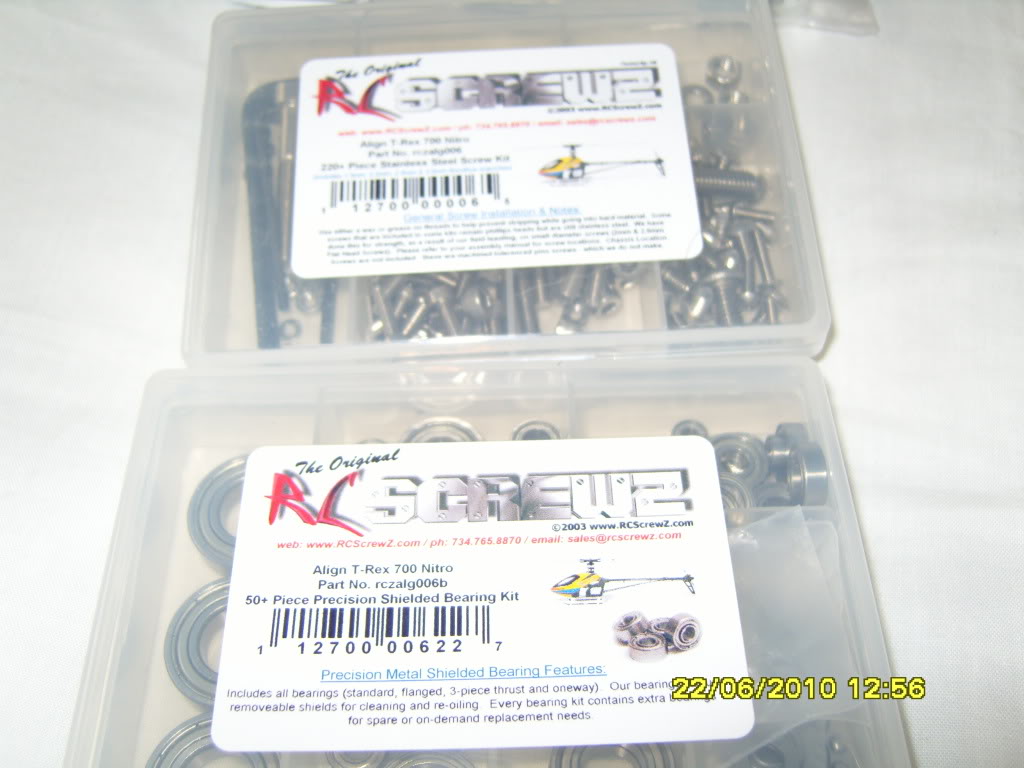 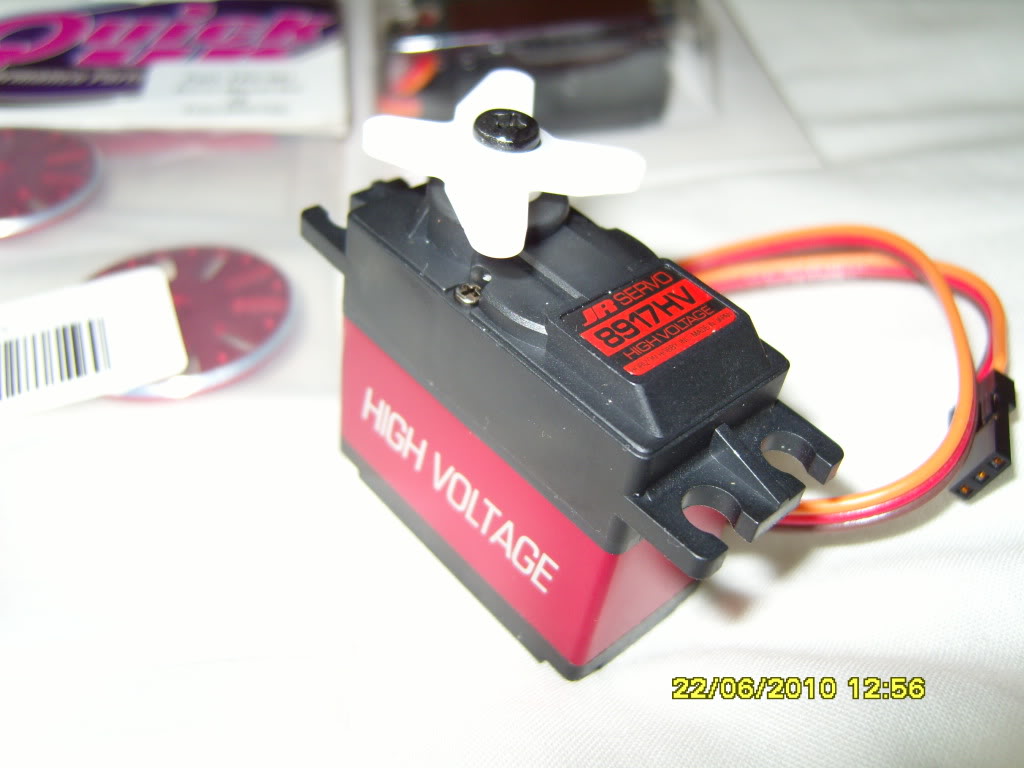 Over the weekend I'm planning on preparing the carbon frames first.
Sanding the edges with some wet and dry 1200 followed by a few coats of some clear nail hardener.This works better than the old ca glue method because it takes longer to dry and it comes with it's own applicator brush.I had to buy my own because my mother says she's mysteriously lost her's.

Thank you sir.
I'm still wondering whether to get the dremmel and mirror pollish all the metal.
You can't beat some good old bling bling.

Nah, paint it matt black, the lot of it. Stealth technology is where it is going down next year

Black! mat black! that is just so wrong.

Just got a delivery from the friendly postman.A couple more upgrades inching ever closer to starting the build.
The Quick uk clutch.
Lynx titanium frame screw set.These look very nice and even have the Lynx logo etched on the head of each one.I know,I'm sad.
And I finally picked a paint scheme so here's the canopy. 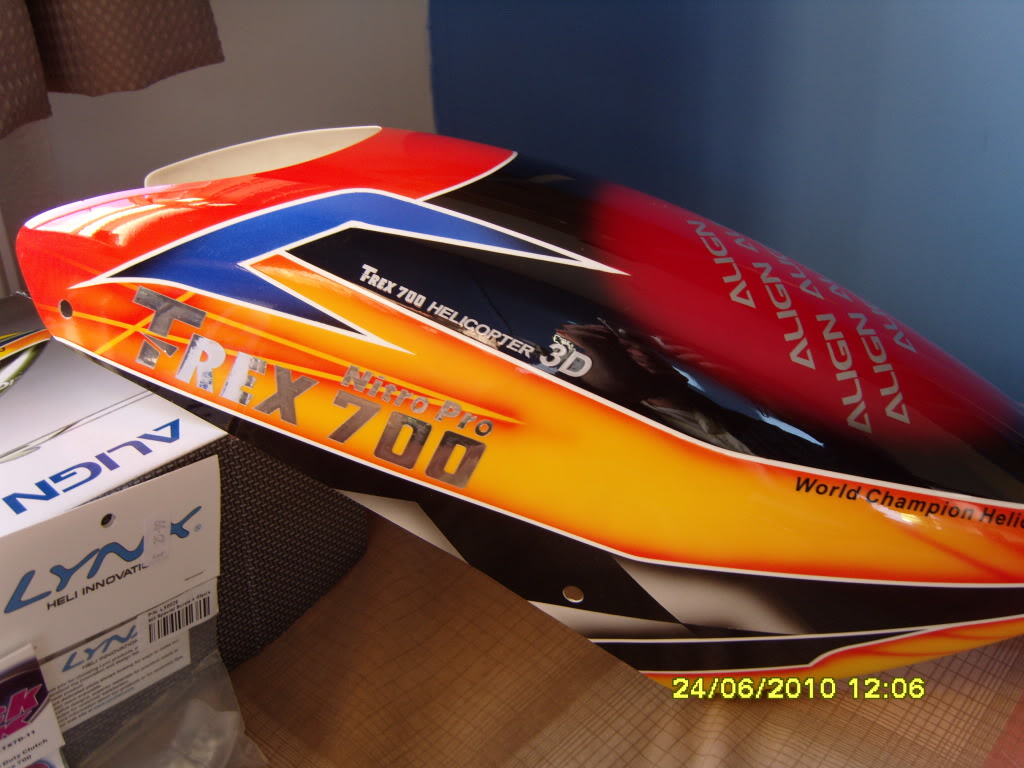 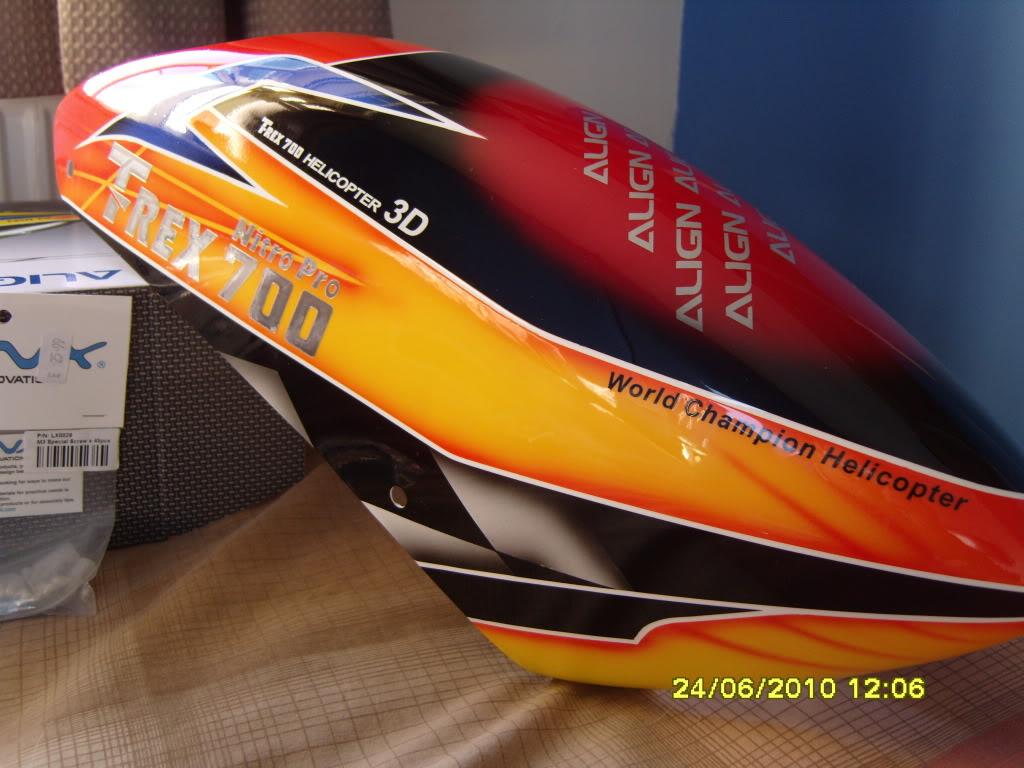 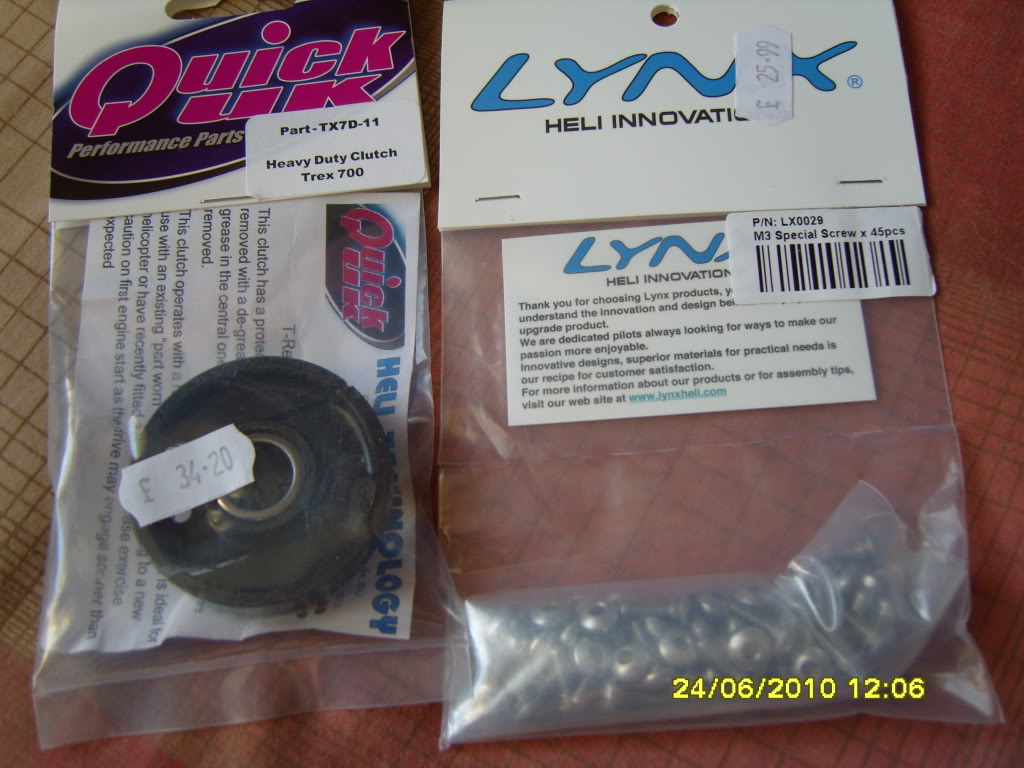 Sweet! - Def need the mirror polish bling to go with that canopy!

Now stop farting about and get building!

Finally got started building yesterday morning and everything has gone smoothly so far. 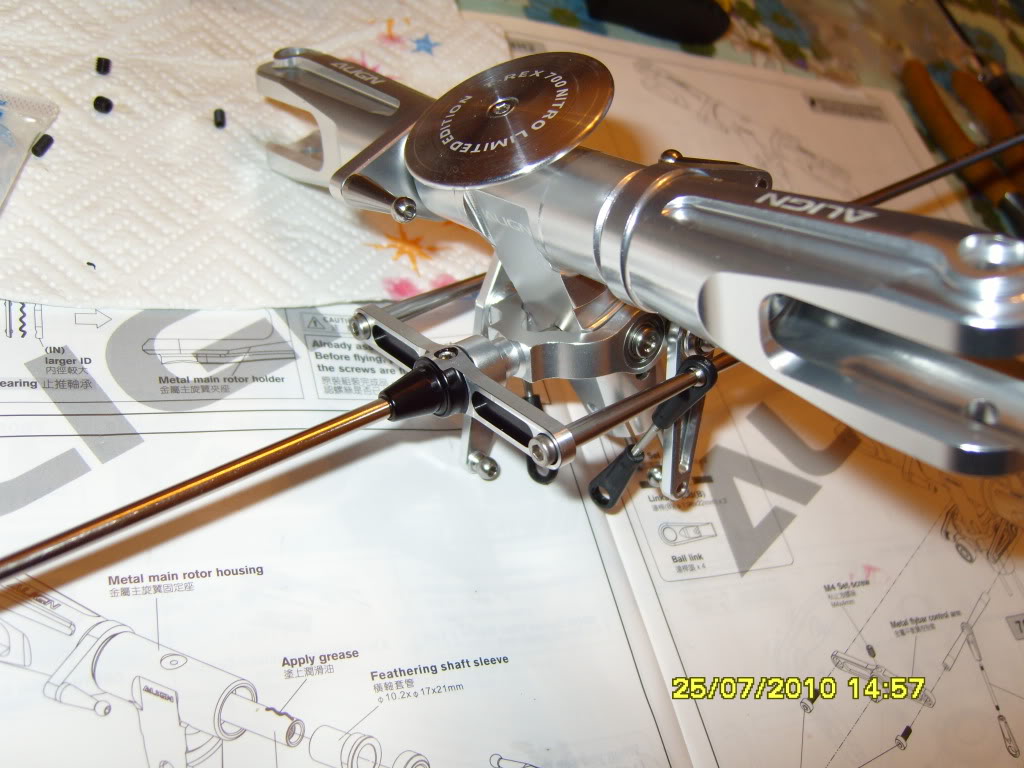 The head went together very smoothly with no slop or binding anywhere,and all the head links are free with no reaming needed. 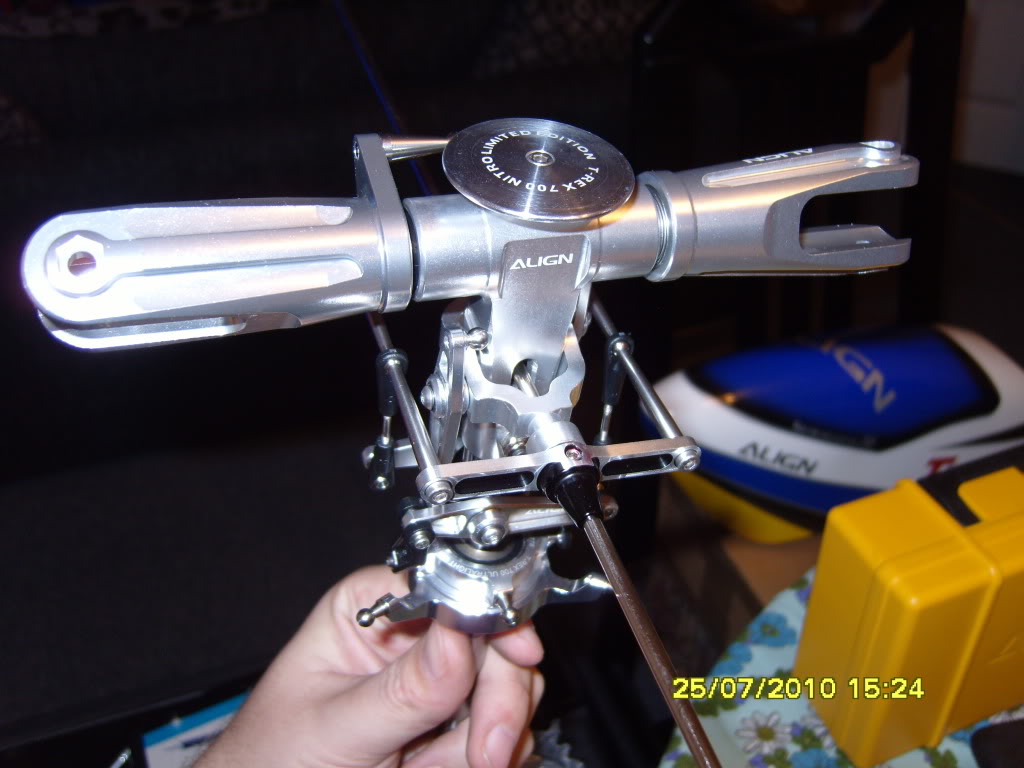 The carbon frames were a little rough around the edges with a couple of areas showing a little de-laminating.Nothing a little wet and dry 1000 wouldn't sort out.
It took about 6 hours to finish sorting out the carbon and after it was all neatly sanded it had many coats of clear nail pollish,followed by some more sanding and a final coat. 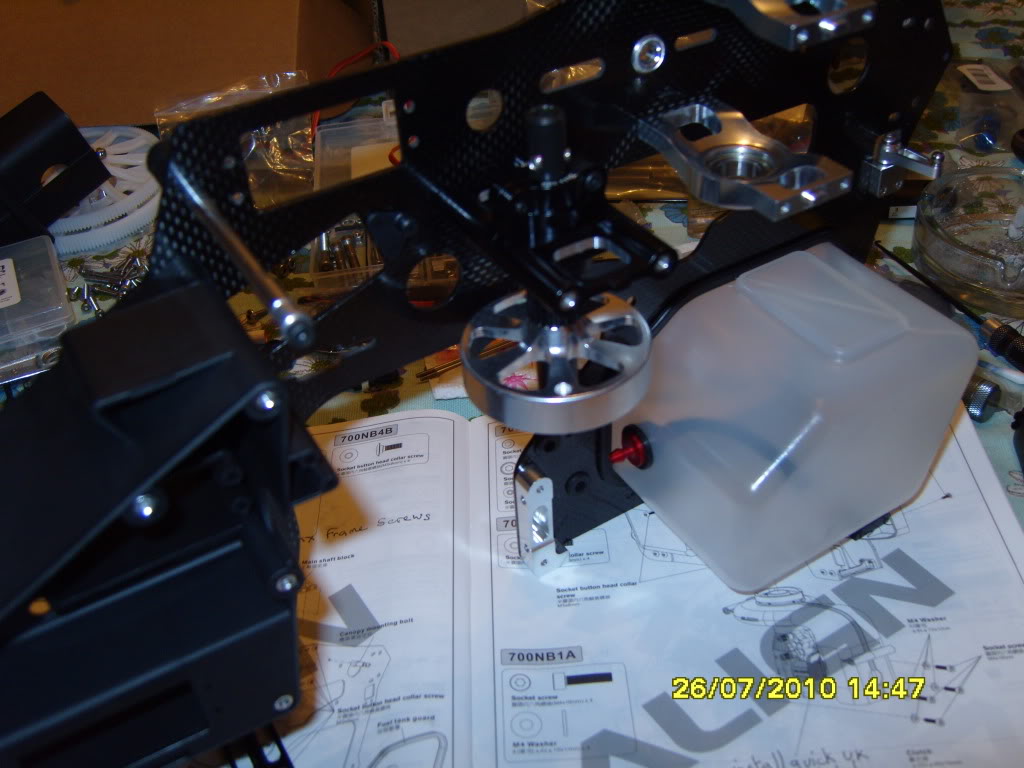 All the bearings have been swapped out for the stainless set as have all the screws ect.
I swapped out the plastic clutch bearing block for the metal one.The plastic one tends to tweak slightly and tighten the gear mesh on the 600 so that's why that was changed. 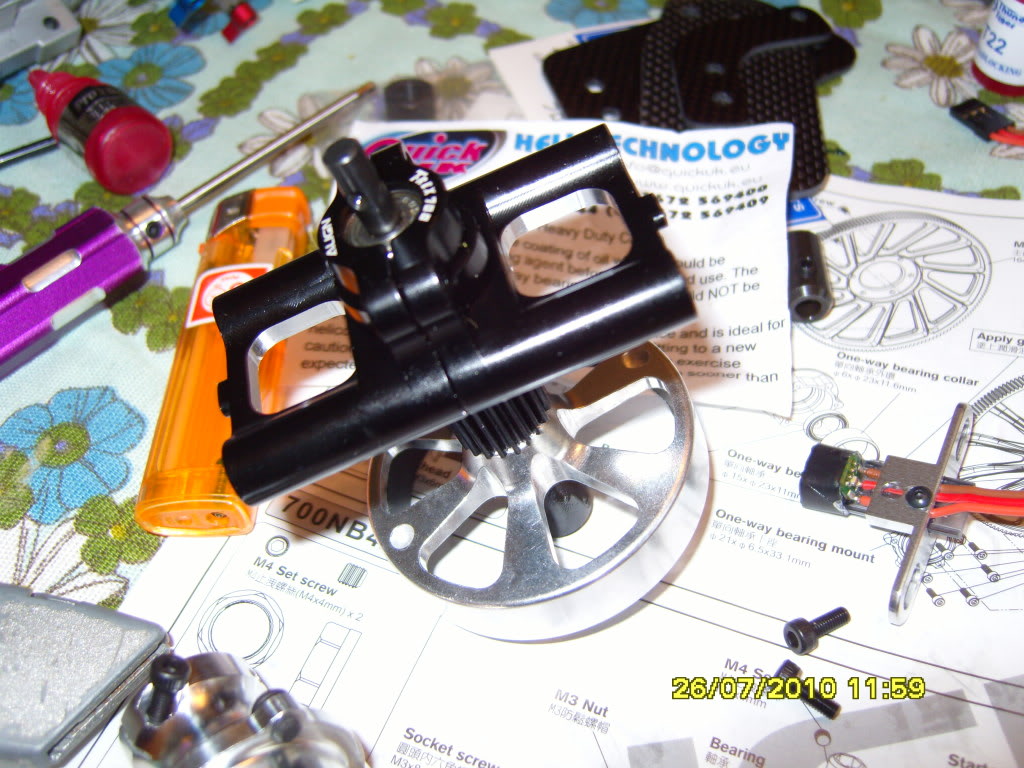 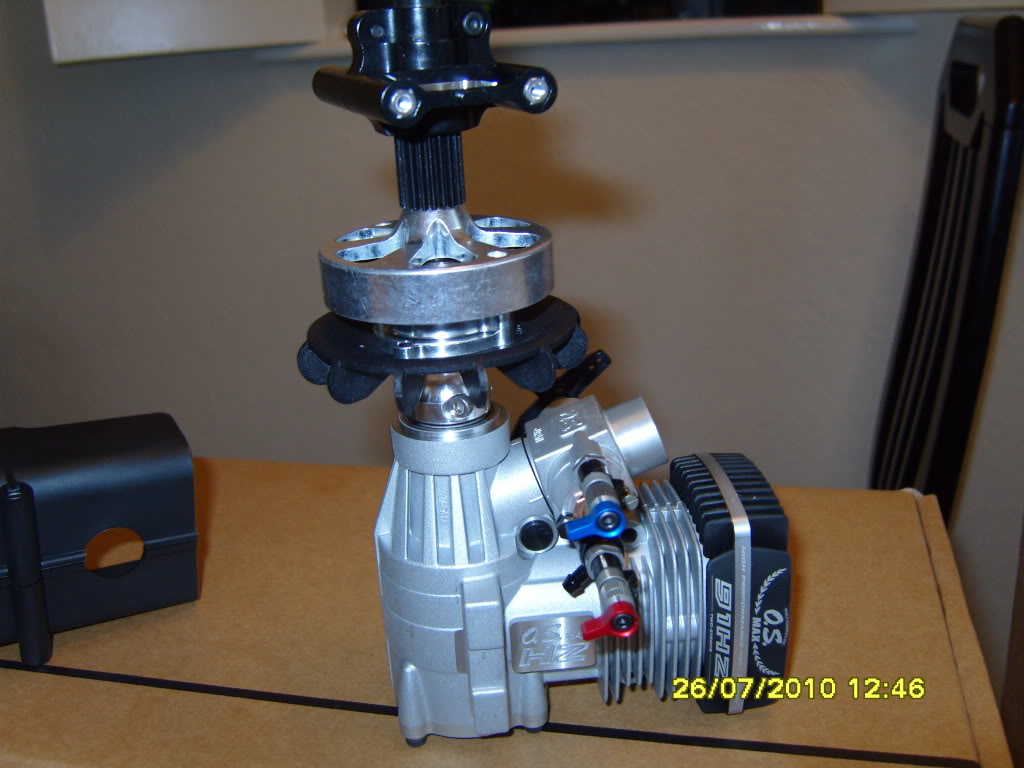 I just finished mounting the engine into the frames and the quality of the Lynx titanium frame screws is stunning. 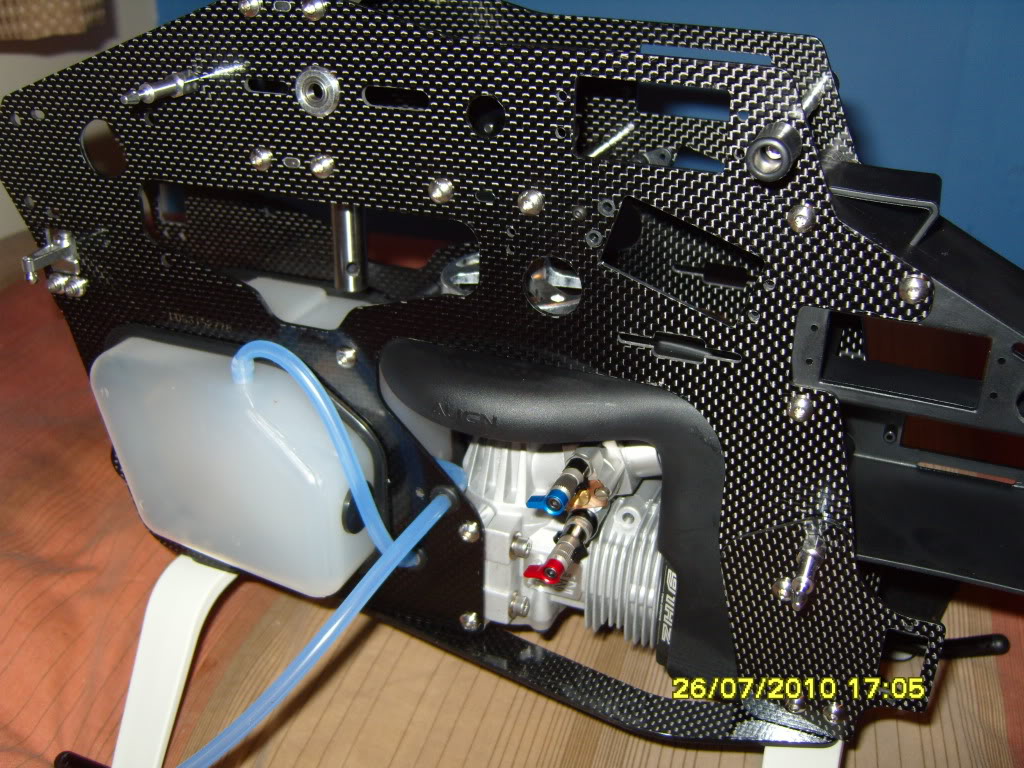 Right it looks like it's coffee break over and time to mount the servo's.(I'm excited about this bit)

Good job Danny.
Just worth mentioning to you that its really hard to change the fuel tubing in the tank if you use the inner hole, you almost have to take most of the frame apart to get to it !! (not impossible)

I used the outer hole on both of my helis as seen on your last photo, it makes life sooooo much easier to service / change the fuel tubes.

Keep it up (the building thread I mean)

Thanks Zaide,yes I agree with you about the clunk position.
However my borderline OCD likes things to be equal on each side.

I just had to get it to reach into each corner the same amount.
When you take the bottom plate off you can get to it from underneath with some fancy finger work.

Nice work Danny, how do you manage to work on that bench with everything to hand. I just cant cope unless I have to spend an hour looking for each tool!

I have a funny feeling that isn't normally a workbench, i think it normally masquerades as a dining room table! Looks good so far though. It will be interesting to see how the stock plastic clutch bearing holder holds up on mine.... I had heard that it was a bit of a weak link, but we'll see.

On the fuel tank, I've had to use both holes for mine (feed and return pipes) and getting the inside one plumbed in neatly without kinks was an utter bottom of a job! Are you planning on running a header tank at all?

Nah that fancy patterned stuff looks like something you would have on your bed I reckon, the workbench has to be where he also puts his powder & lipstick on before he goes out.
_________________
The best pilots are the ones that practice most!

That sounds about right, I been there I've seen the lipstick,powder& eye liner. Danny tells me that is normal for a modern guy...! But what do I know

Powder and lipstic,you gotta take care of your skin.

You're quite correct about the table,too cold to work in the shed at the moment.
The clear lipstic is fantastic for carbon edges,trust me.
Zaides version of lipstic and powder is a leather thong and a pool ball in his mouth. 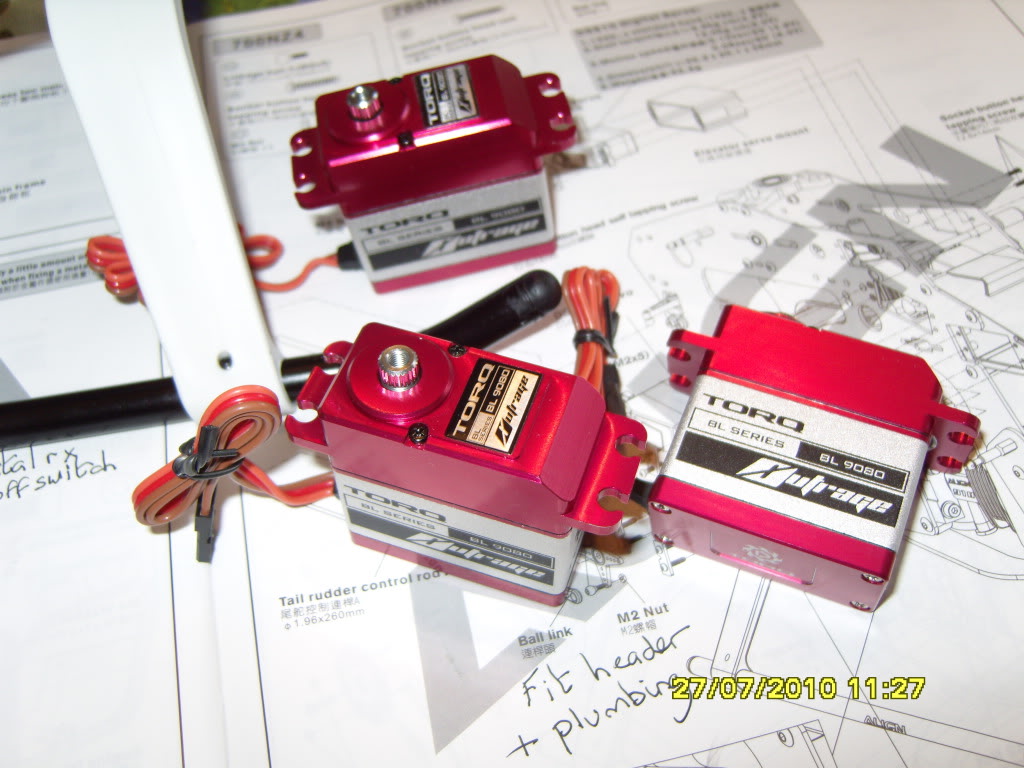 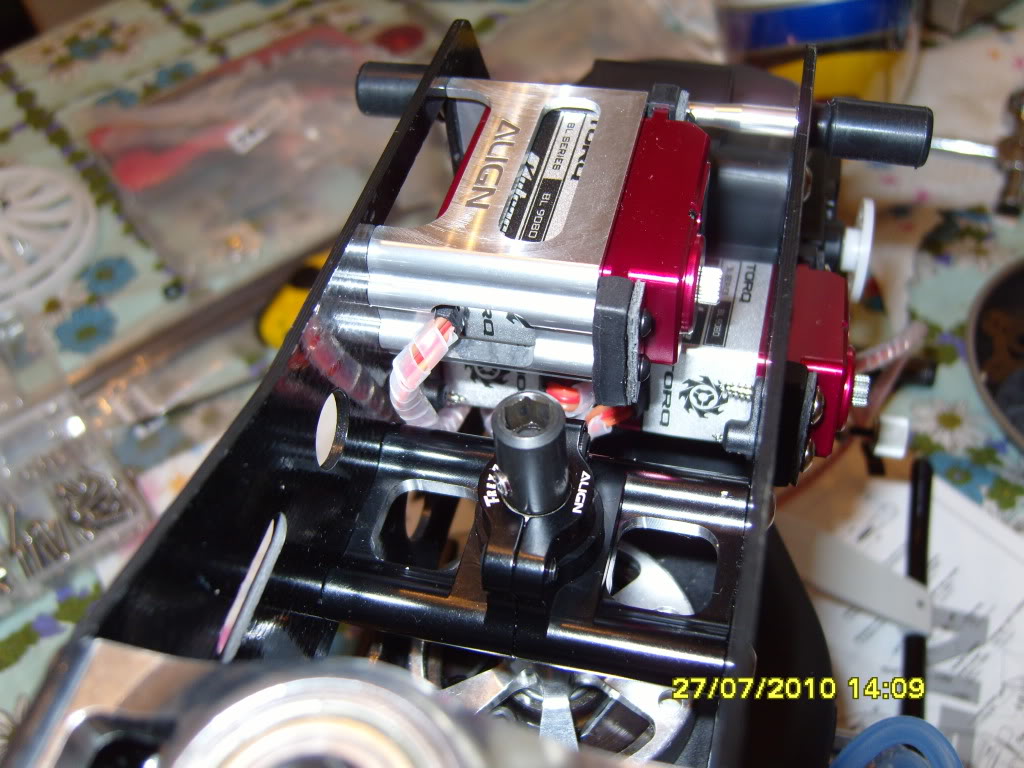 The servo's are in and looking good.I just need to power them up and centre them once the links are in place. 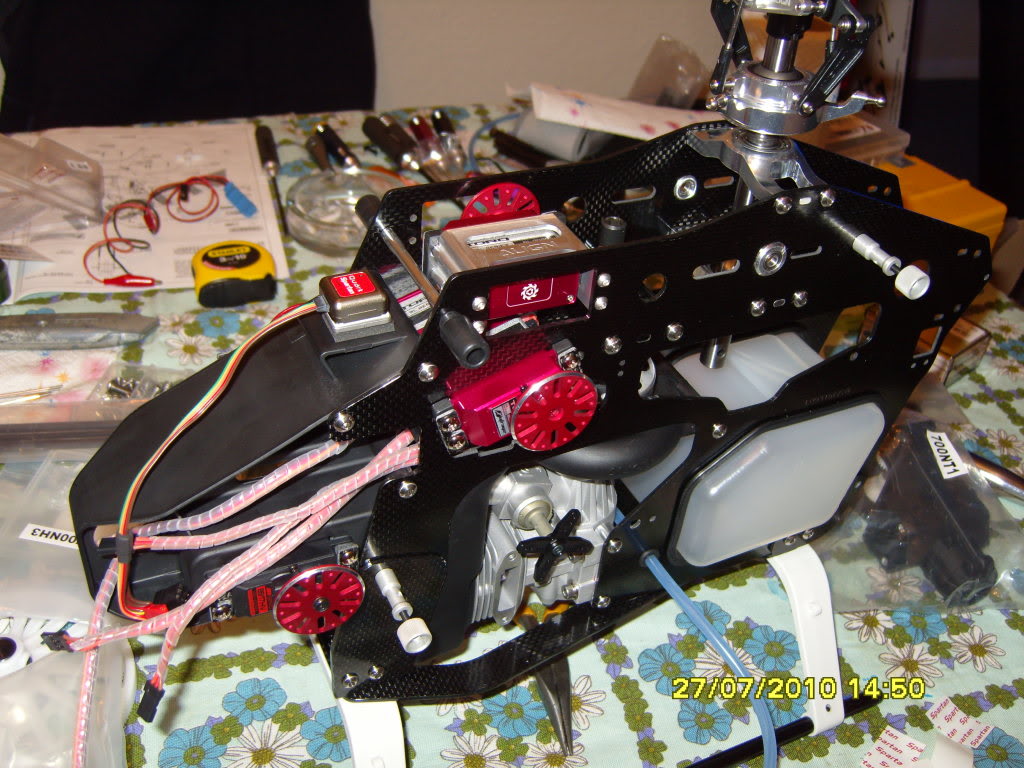 I took a couple of pictures with the canopy on just to see how it looks. 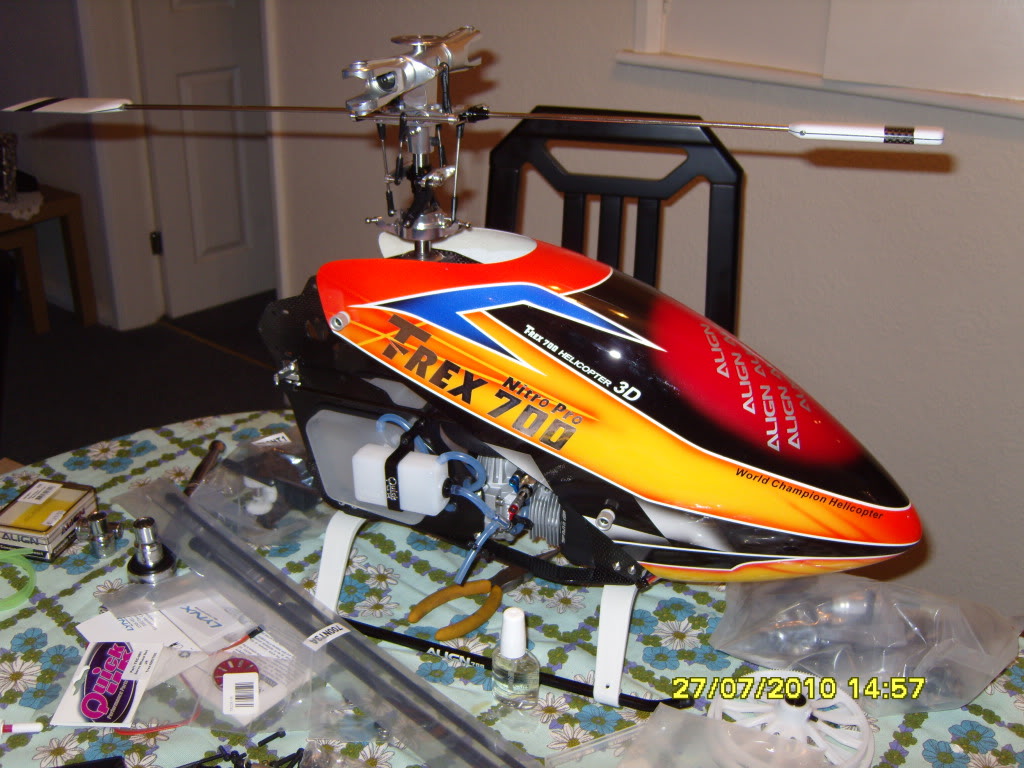 Tomorrow I'm hoping to get all the links setup and then the reciever done.Then it's time for the boom,woohoo.

As much as I don't do Helicopters, that looks the dogs B*****KS, very professional

Thanks Rich,I just hope it flies as well as it looks.
Fingers crossed.

I do like the Torro blingy servos. Are they ally cased?

2 am posts! Good going there Danny!

Yes Mell,alloy cases,titanium helical cut gears and brushless motors.
Outrage Torq BL9080 is their full name.Apparently they're making a mini version as well in the near future.

Andy I forgot to mention,don't worry about the plastic clutch bearing block.It works perfectly fine.The only reason I had to replace it on the 600 is because mine needed the bearings changed quite regularly,and after removing it a few times it became a bit sloppy.

Welcome back Stubbsy,I was wondering when you would be able to plow your way back through the snow.

There's not much progress been made today.Just lot's of link building and a quick wire run to make sure all the wires reach the reciever. 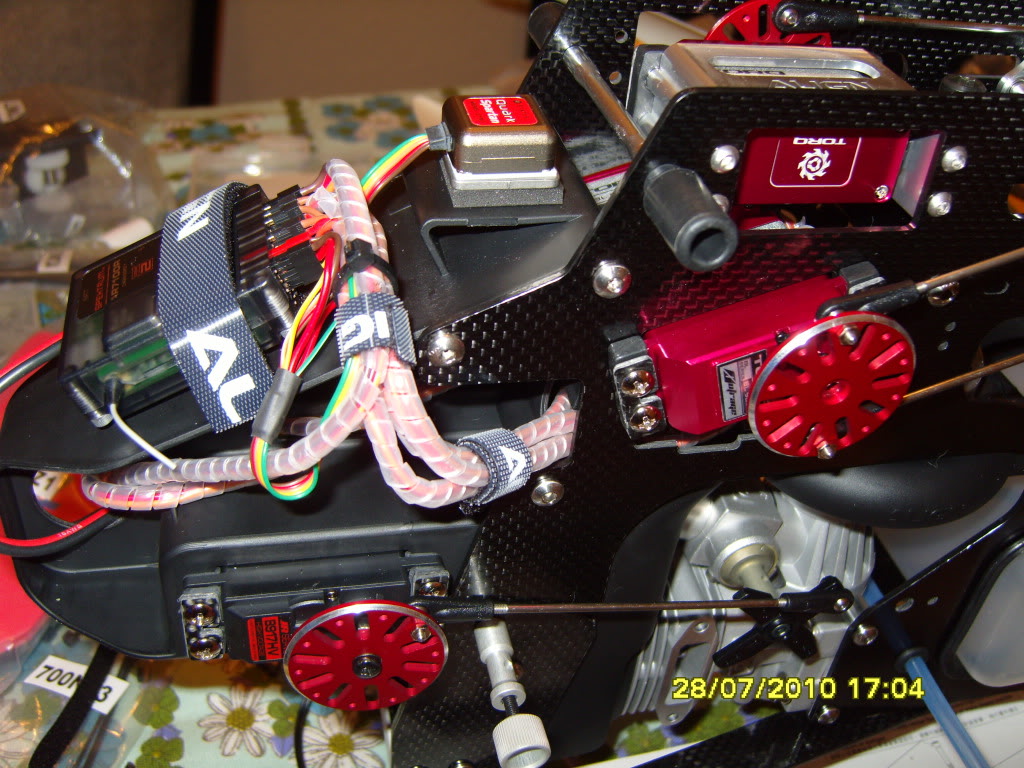 Everything does reach but the on/off switch is much smaller than the hole provided so I need to modify the plate or use another location.
Also the rev limiter sensor and the push glo pro wires need routing so that they don't obstruct the removal of the engine.I like to be able to drop the engine easily without disturbing the wiring.
Looks like it's time for a brew and a thinking session.

the on/off switch is much smaller than the hole provided so I need to modify the plate or use another location.

Or get one that does fit.

the on/off switch is much smaller than the hole provided so I need to modify the plate or use another location.

Or get one that does fit.

It's a strange one because it's a fail on soft switch that comes with the 7100R receiver.
I'm looking at it now and maybe thinking of using hot glue under the bottom of the frame.
Then maybe use a small Velcro strap to give a little extra support.
Maybe.

A little more done this afternoon.
I wasn't exactly sure about what the benefits were to using the KDE tail upgrade,but there is 2 advantages.
First is an extra radial bearing on each tail blade grip after the thrust bearing. 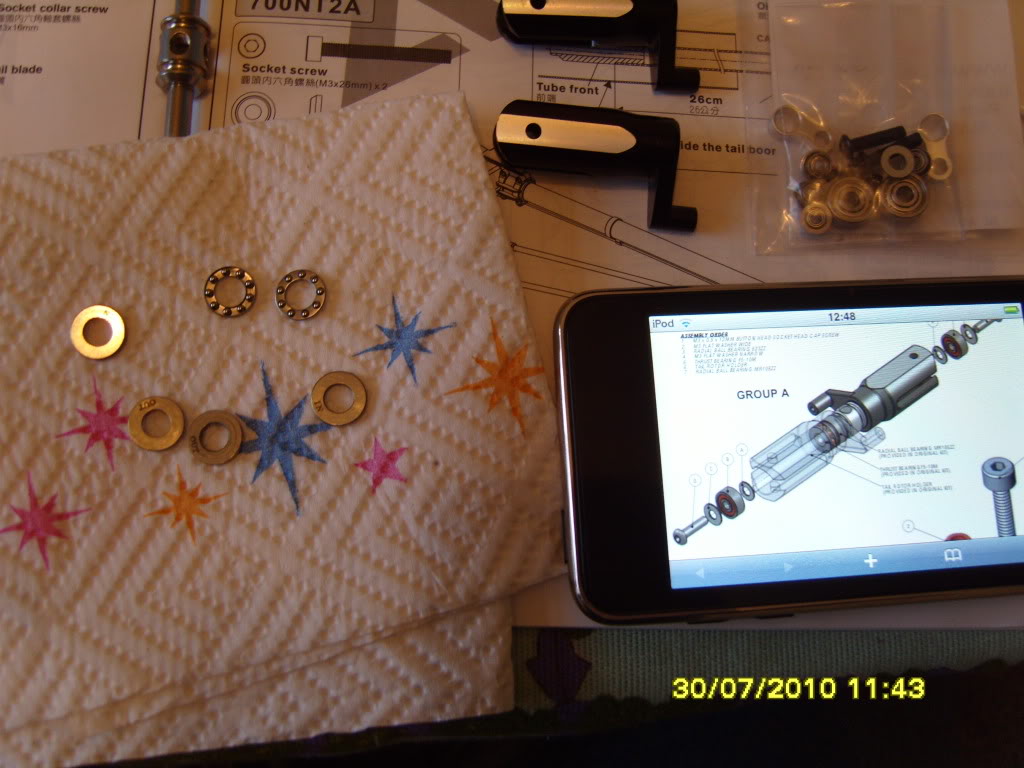 This now sandwiches the thrust bearing between 2 ballraces.
The second is the double joint arms that normally articulate using 2 bushes. 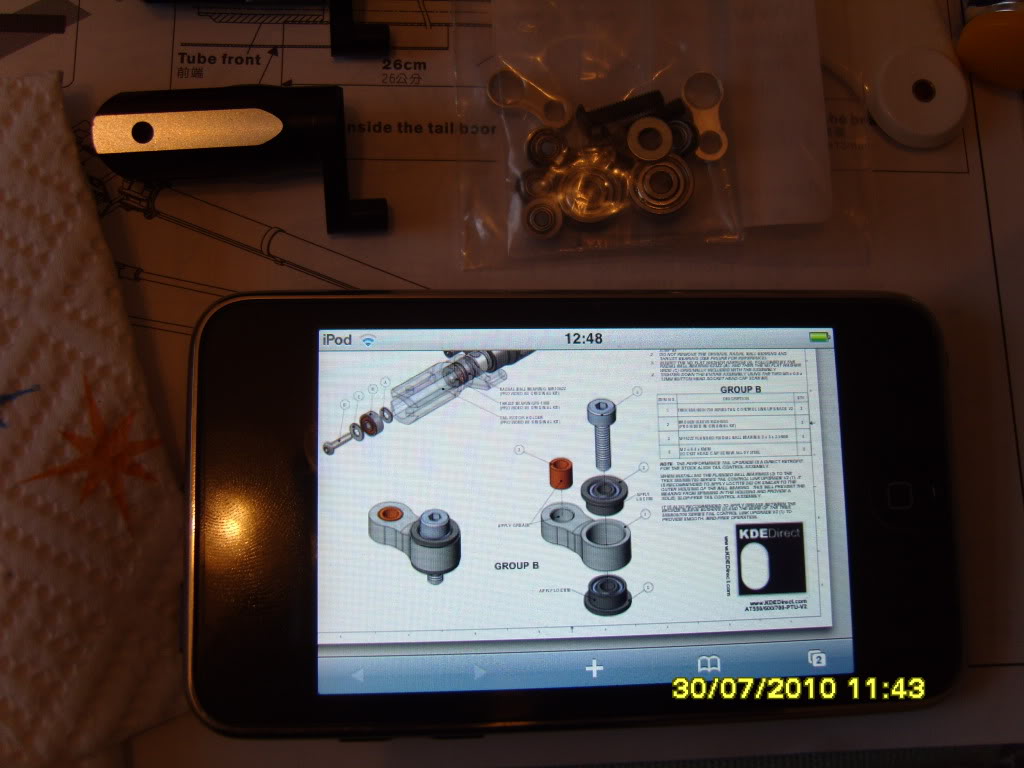 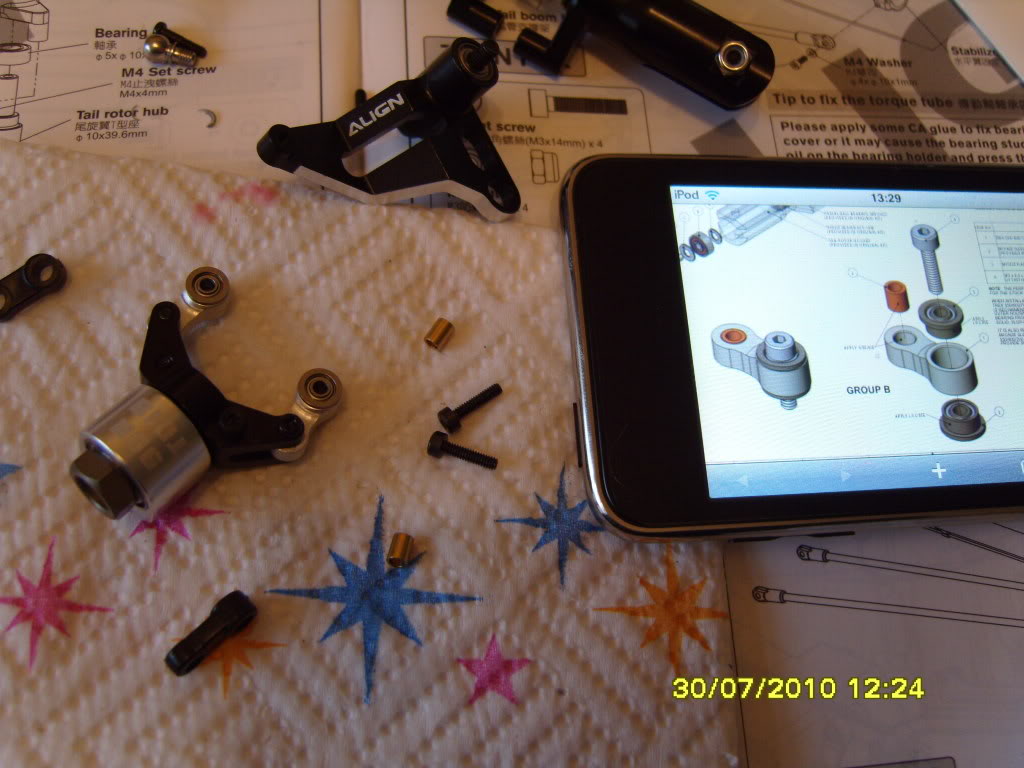 The double joints are now metal and articulate on 2 flanged bearings.
The other change I've made on the tail is to ditch the plastic tail pitch control arm for the metal one. 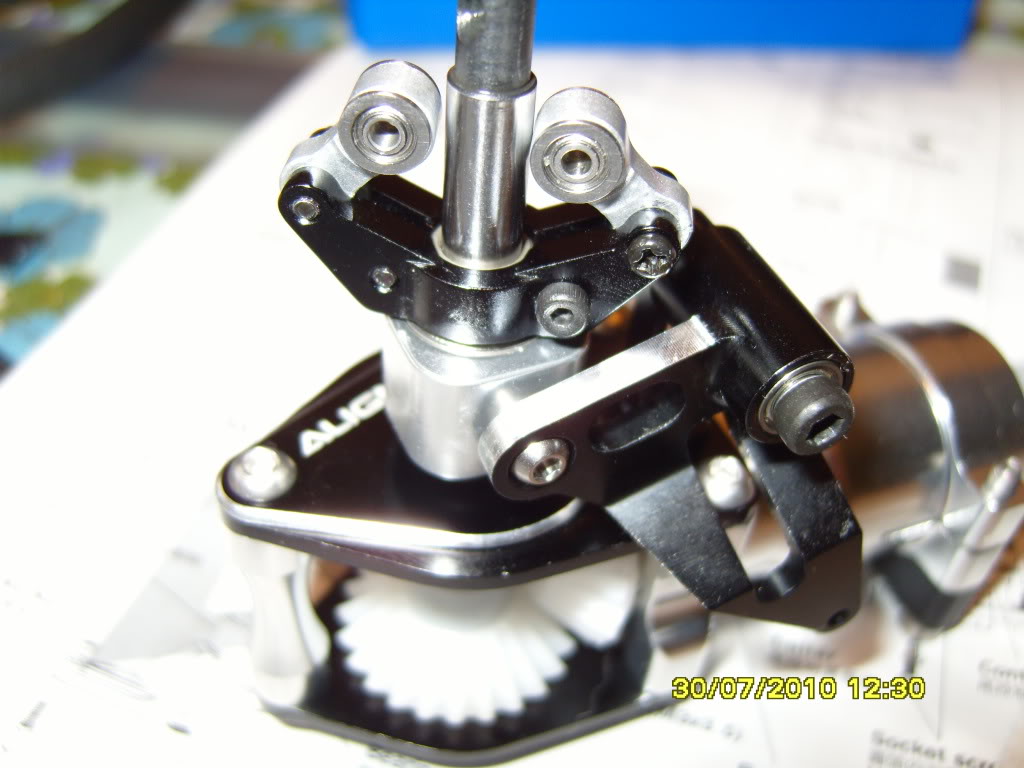 This makes for a super smooth tail with no slop anywhere. 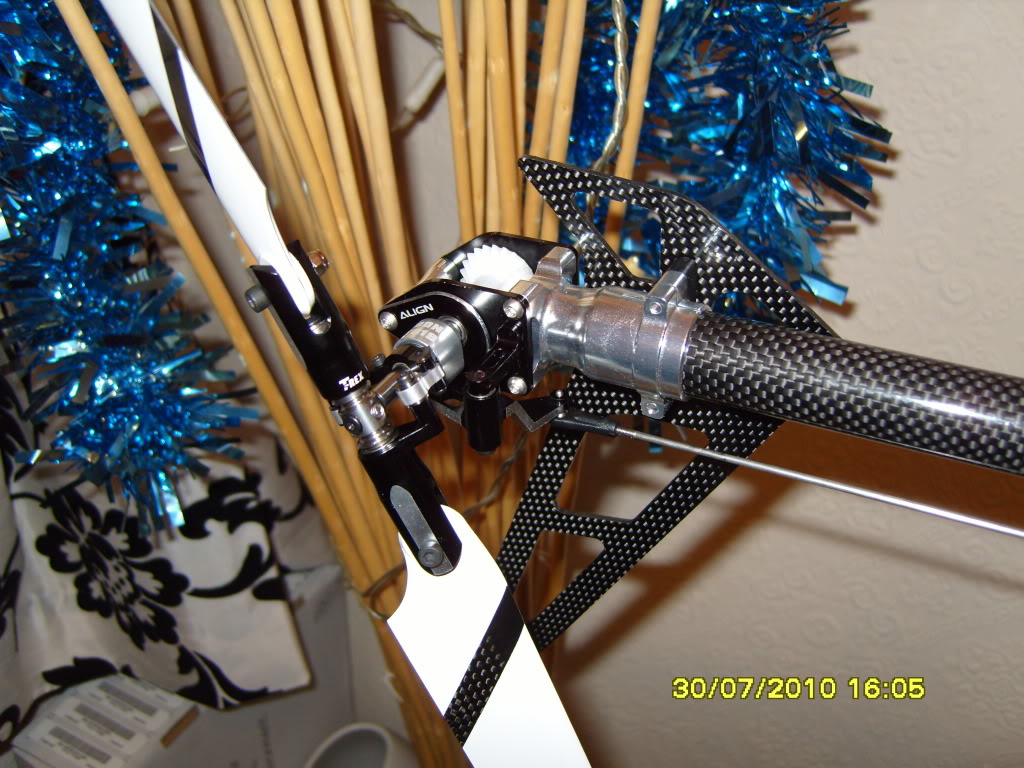 I also powered up the servos to centre them and they are super fast and quiet.
I'm a bit surprised with how loud the JR8917 HV is on throttle.I thought someone had parked an Astra diesel in the living room and left it ticking over.

Looks like it's time to pour the JD and coke.

I managed to get more done today with some more photos.
There's a couple of notes worth checking on all 700 kit's.
One thing I noticed was the elevator bellcrank had a lot of side to side play.It was enough to allow the anti rotation bracket to twist by about 5mm.I think with this amount of play it could allow a small amount of interaction when the swash is tillted at the extreme of it's throw.
What I did was I put 2 shims of 0.2mm on there.One on each side which now leaves minimal play and it still has full freedom of movement.On page 16 in the manual I've illustrated where they went.
It's also worth sorting out the bellcrank and tightening up the ends before tightening up the set screw in the centre of the anti rotation bracket.This will allow it to all be centred before locking the bracket down. 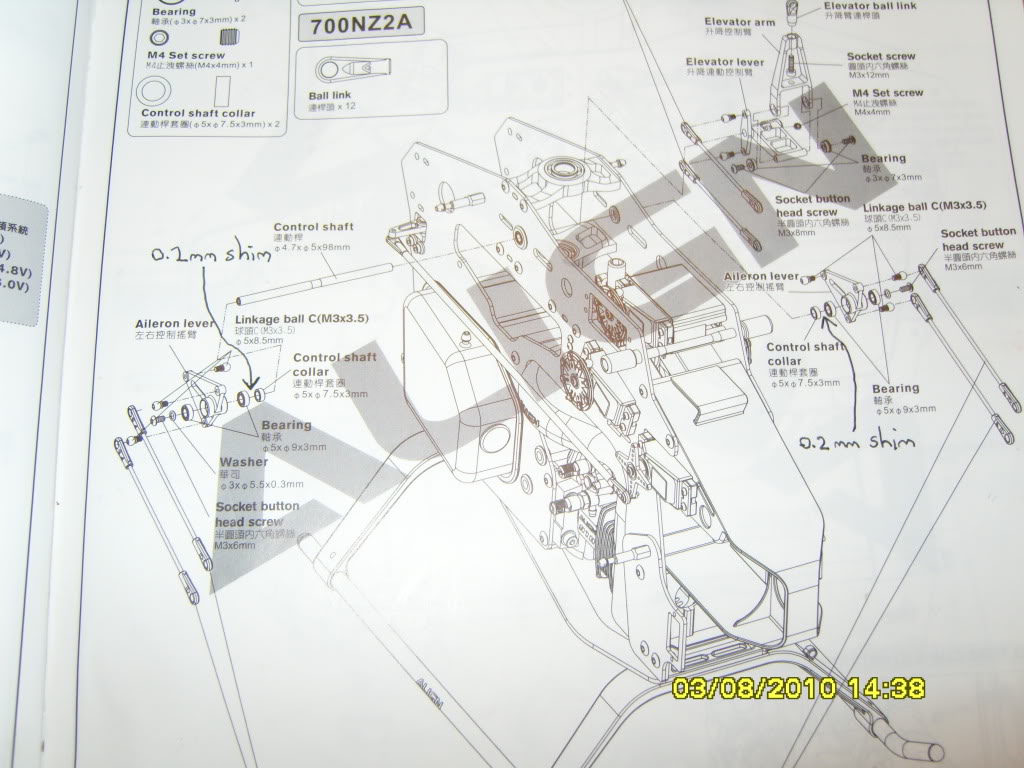 For anyone using the Hatori sb20 pipe it is best to assemble it and fit it before putting the engine in the frames.
The other thing worth noting is that on page 18 if you look at the top illustration you will see the long umberella gear.There is 2 bearings on it and the one nearest to the gears teeth could do with a little ca glue and then pushing it all the way on firmly to prevent the mesh from tightening and possibly stripping a gear.

The transmitter values so far are,(for JR sets,Futaba may be different)

Channels reversed ch3,throttle,rudder and ch6
Endpoints for the throttle are H 102% and L 96%
Servo horn distance on the throttle are 14mm out and 13mm out on the carb.
When using the rev limiter it is important to get the throttle end points as close to 100% as possible,which requires messing round with different servo horns untill you get them to within 10% of each other and both close to 100%.This is why I've noted the distance out I ended up with on the servo horn.

Tail servo wise I ended up with 14mm out which should give a good compromise between torque and speed.

Something else worth a mention is that on JR sets with the 7100R reciever to use the governor menu for headspeed you need to go into the devise select menu and enable the gear output to read "GOV".What this does is it uses the gear channel as the gov menu.
Now you need to go to "AUX2" and change it to "GYR".
Next make sure you plug the gear lead on your gyro to the "AUX2" on the reciever.
What you end up with here is the gov menu now picks your headspeed and the gyro sets your gain on the gyro. 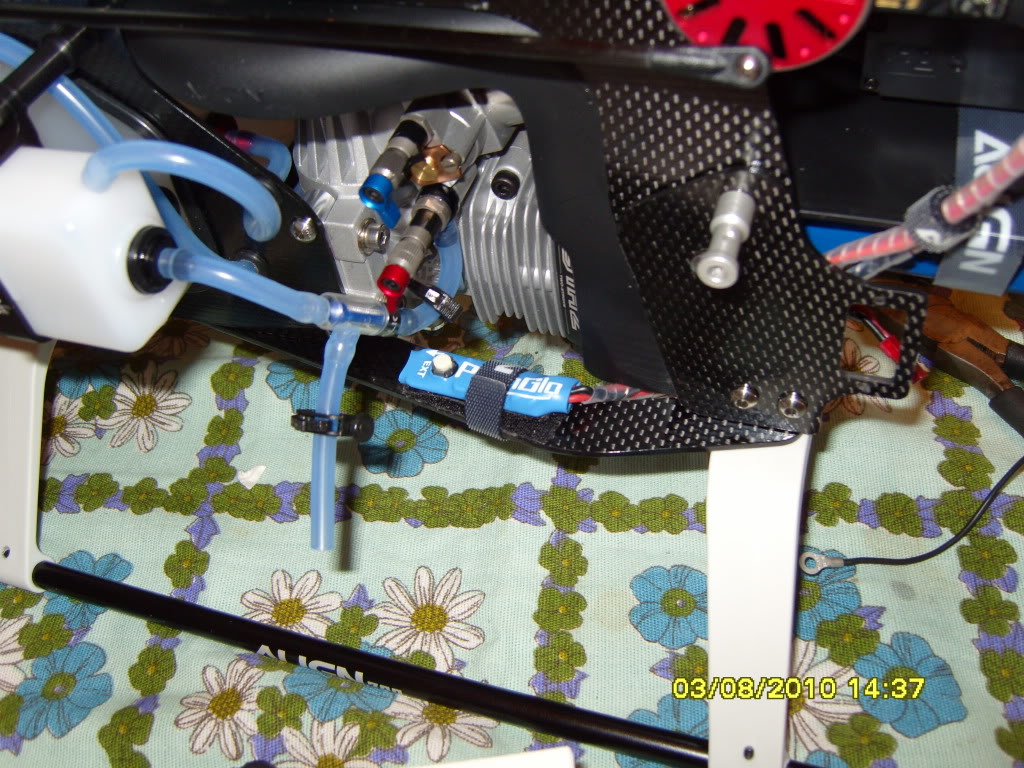 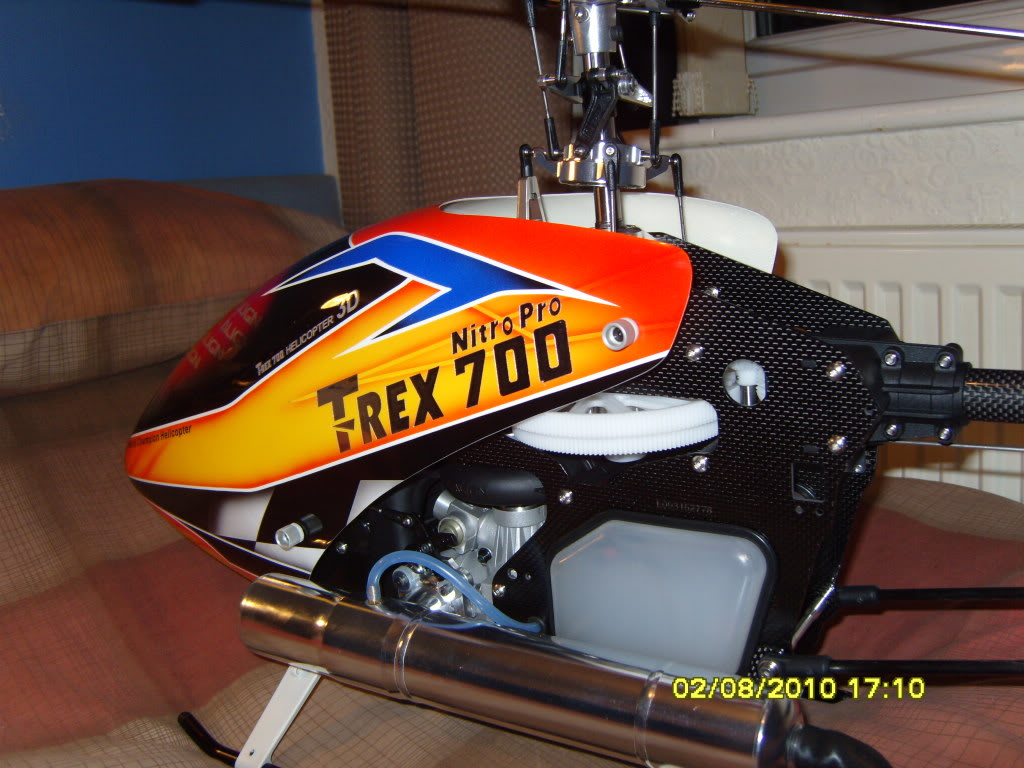 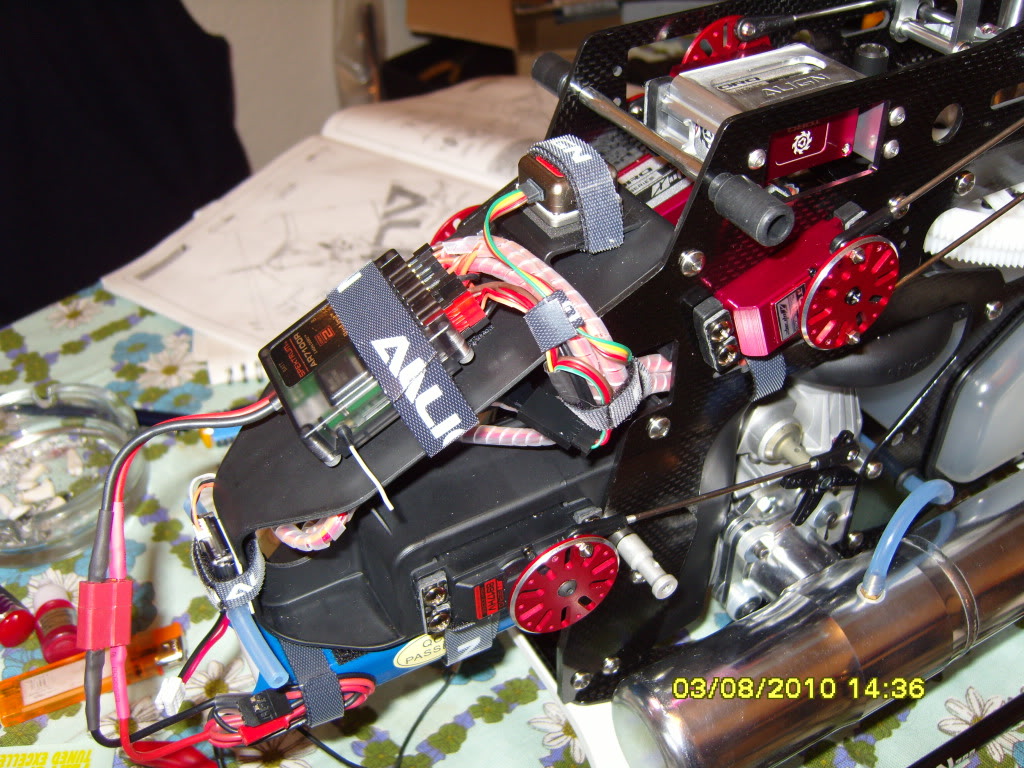 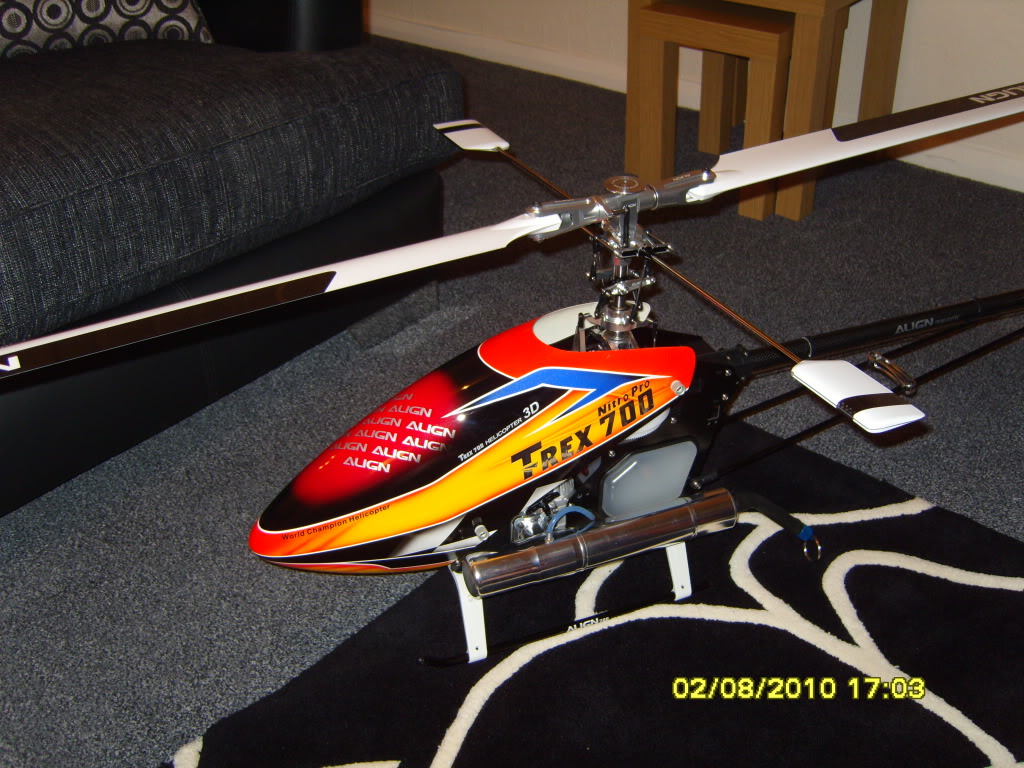