A few weeks ago I brought my new creation the Sonerai to the field for its first outing. It's maiden flight never took place as the engine refused to run. The engine in question is an ASP .32 which previously powerd my Kerfuffle for a brief spell but was replaced when it became troublesome. Anyhow the carb was stripped and cleaned and the engine fitted to the Sonerai. Following the disappointing first outing of it I have now replaced the ASP with an Enya SS .25.

Once I had removed the ASP from the airframe and removed the exauhst I discovered a reddish brown deposit on the outlet manifold and the inlet of the silencer. I then decided to remove the crankcase backplate to investigate further. Upon its removal I discoverd tom my horror that the crankshaft couterbalance and crankpin were badly rusted. The rest of the engine was then dissmantled to discover that both bearings are shot and the gudgeon pin is also in need of replacement.

Here are some photos of the rust damaged parts:
[img] 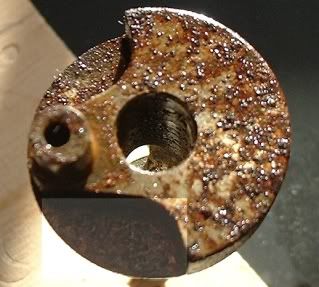 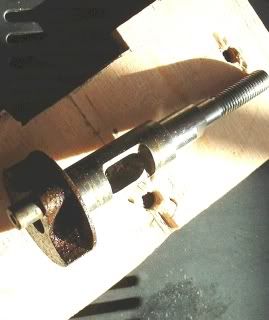 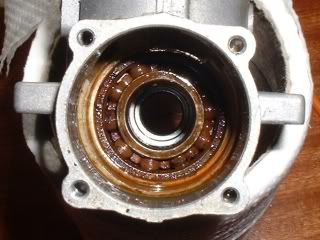 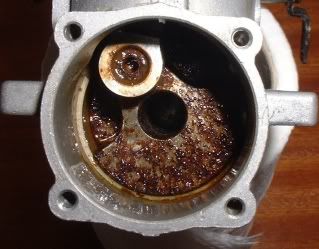 Pretty bad as you can see. I now have a question for any of you engine Gurus out there. How should I go about removing the old and re fitting the new bearings? Any help on this would be much appreciated.

I have owned many engines in my time and whilst I have encounterd some minor pitting of steel and iorn parts in my engines in the past I have never found anything near as bad as this. It makes me wonder if the rust was in there soon after manufacture as I bought it some time ago and it was stored in unused condition for about two years before being used for the first time.

Hi Mel, Bearing removal is quiet straightforward once you have done a few. Strip the engine down so that you just have the crankcase and bearings. You now need to heat the crankcase. The case having a higher coeficiant of expansion than the steel the bearings are made of will expand more and allow the bearings to be removed. Once hot a sharp rap on a block of wood and the rear bearing will come out. You then need to use a drift to push out the front bearing. I use a piece of ally so as not to damoge the crankcase. I use a paint stripping heat gun as a heat source but another method is literaly to cook for 10min at gas mark4 in the oven

Replacement is done by again heating the crankcase untill the bearings just drop in useing the crank to ensure they are linned up correctly and bottomed in their housings..

The only way to slow down this rusting process is to do as we do with our helicopter engines and that is to
1. Run the engine dry at the end of a flying session by removing the fuel line.
2.Turn the engine over with the glow connected to remove the last traces of fuel.
3.Rotate the piston so that it is at TDC and blocking the transfer ports
4.Block the exhaust.

This stops air and moisture from entering the engine and reacting with the exhaust residue and methanol left in the engine.

You note that I said slow down the rusting process not stop it. The only way to stop it is to flood the engine with after run oil and wrap it in an air tight bag.

The best way to stop the rust completely, is to swap the engine for a motor

Seriously though, corrosion of steel/iron will only occur when two things are present and in contact with the surface of the material. Water, and Oxygen. Exclude one or both of them, and you will not get any rust forming. The thing is, that is much easier said than done

Slathering components in (after-run) oil will go a long way to excluding moisture, but what can happen then is you get little pockets of moisture trapped under the oil film, and this can quite often accelerate corrosion at the oil/water interface. It's quite a well documented phenomenen in full size aerospace circles, I'll try and dig out some white papers on it for you to read through if you like?

All of Dave's advice is bang on the money too. If it were me, I would treat whole engines as consumables, and beat the life out of them, expecting them to die sooner or later, be it from corrosion, crash damage or over use!

Magic Words needed here 'Lyophilic' (likes water) and 'Lyophobic' (hates water)
Steel parts are usually prone to rusting. In the case of hardened steel, as used in model engines, this effect can be severe.

WD40 contains a chemical molecule that is Phobic at one end and Philic at the other. It interposes itself between any water and metal. It is a spin off from chemicals used to mothball military equipment. It is another reason why modern cars seem so corrosion resistant.

Methanol and Castor oil are both Lyophilic.
Not a problem because moisture (H2O) is produced in combustion anyway. However, the combustion does produce a potentially acid residue which is corrosive to hardened steel parts. The engine should be rinsing out with fresh Nitro free fuel containing a corrosion inhibiting oil. PAW recommend leaving the piston down with the exhaust port open to allow any residue to disperse when the engine is stored.

Nitromethane
Another name for Nitro Methane is Nitrated Methanol, it is made by reacting Nitric Acid with Methanol.
As soon as it burns in an engine it releases large amounts of Oxygen. It also releases other chemicals and in particular, Nitric Acid.
Nitro allows extra fuel to be admitted. The extra oxygen from the Nitro supplements the limited fresh air supply that the engine would normally breath in. Hence the fuel / air ratio can be increased and the engine will then produce much more power.

Unfortunately
the residues from burnt Nitro leave a very corrosive acid mixture behind in the engine. If this is not removed entirely, the hardened steel parts of the engine will rot away very quickly. This is accelerated in warm damp conditions.

There are after run oils available in the model trade.
e.g Model Technics
"After-Run Oil should be put into the engine after each session of use to give additional corrosion protection. It also makes a superb general purpose lubricating oil and is supplied in a spouted container."
Price £3.05

or use a fuel with only synthetic oil. bin that southern modelcrap and get some bekra

Leigh
You scored, but entirely missed the point.
Nitro will still rot it to bits no matter what lubricant you use.
How do you ensure your engines last?
PQ

I have a simple method of making sure my Engines last. I don't buy any, and use electric motors, as God/Buddha/Flying Spaghetti Monster * intended

i use them paul, like dave said an engine is a consumable, every motorsport going looks at an engine that way, they only run for so many hours and there done. or at least past their best.

also modern fuels with synthetic oils naturally inhibit corrosion as the oils are lyo(hydro)phobic. so whilst concise my answer didnt miss the point

on the other hand.
if im storing an engine, strip it clean it with petrol and apply plenty of wd40 then into a sealed bag. re assemble it when it is put back into use with new seals o rings and gaskets.

if the motor is of no real value or pedigree then chuck em in the bin cant go collecting paperweights forever, we aeromodelers do seem to have an afinity for holding on to clapped out old motors which barely run and cut constantly.

Not sure what's happened to the photos they were there when I did the post yesterday.

Sorted Mel, No idea what happened, but I'll say I mended it take all the credit

With the glow engines on cars we have 'after run oil' that stops corrosion from happening!