Ever wondered what these two statements mean and their relevance? The foremost is commonly found in “specifications” on side of a model kit box or on plans, while the latter is rarely stated.

At a recent scale event I was asked this question about my 100” wingspan Stuka. A few nearby modellers were bewildered by the answer and asked for an explanation of what it meant. It may be of interest to the less experienced club member as it gives a good indication of a suitable model for your level of flying experience and a models likely performance.

I’ve seen a few .45 models over the years at the flying field, which frankly fly like bricks. The modeller wasn’t able to recognise the relevance of wing loading and power loading before they purchased the kit, until the model was in the air and did not enjoy it’s flying performance one bit. All too often just the weight of a model is taken as a guide of suitability, but a light weight .45 model can fly like a brick if the wing loading is adverse. So diminishes the myth that only large, heavier models are likely to be difficult to fly when the reality in most cases they are easier to fly as they have a good wing loading. Big is beautiful is a common phrase used by those that have tried large models (not recommended for the inexperienced pilot)

Wing Loading is the models weight in ounces divided by its wing area in square feet. It is the first consideration in choosing a model. The formulae is:

The importance of Wing Loading is that it effects the models level flight airspeed. The lower the Wing Loading, the slower the speed. Most models fly at a lift coefficients ranging from .10 to .20 (CL) and will stall close to a CL of 1. 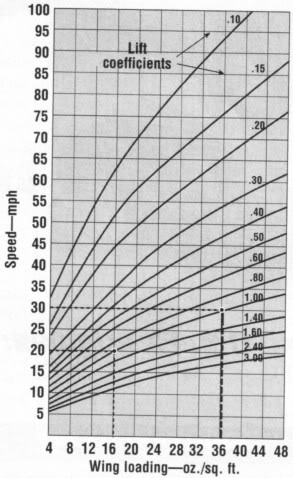 Using the Wing Loading at the bottom of the graph, read vertically to the applicable coefficient and then move horizontally to the left to find the speed in miles per hour. The stall speed is based on an airfoils maximum lift coefficient.

Using a CL of .10, a model with a Wing Loading of 16 ounces per square foot flies at 63 mph and stalls at 20mph. A comfortable landing speed is 25mph.

For a Wing Loading of 36 ounces per square foot the flight speed is 93mph with the stall at 30 mph.

For a beginner, the slower the flight speed at low Wing Loading is more appropriate, as it allows time to correct the flight path. Experienced pilots can handle higher speeds of higher Wing Loading, particularly landing speeds. Now you can see why turbine jets are difficult to fly and land.

Power Loading is similar to wing loading and is the power to weight ratio for 2 stroke engines, assuming an engine of 1-cubic-inch displacement (cid). The formulae is:

Model weight in ounces divided by engine displacement in cubic inches = Power Loading.
As an example, a 30oz model powered by a .10 engine will have a power loading of 30 divided by .10 or 300oz divided by cid.

As with Wing Loading the modeller’s experience and level of skill are considerations in choosing engine size. Large displacement engines that provide more speed and higher wing loading call for more skilled pilots.

So next time you see a model kit stating a “band of suitable engines sizes”, you can calculate if the larger engine is more preferable to one of a smaller size.