Who is this woman??

Who is this woman?? 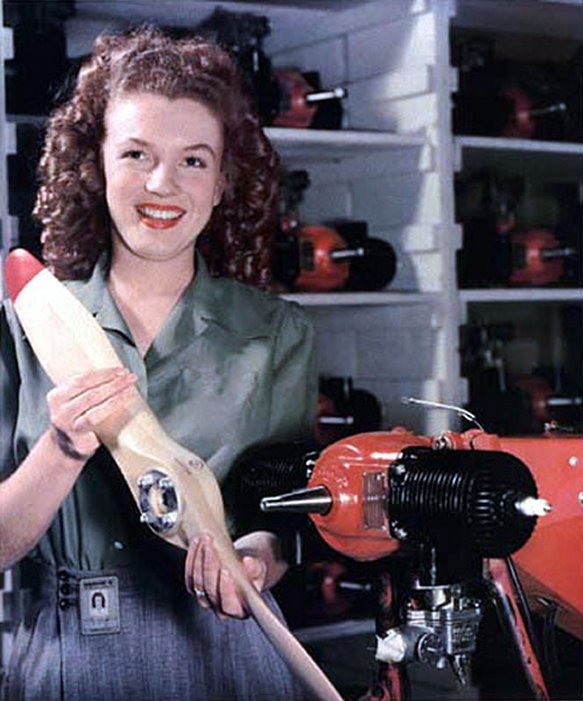 #2 What is her connection with the model?

#3 How did this picture change her career?

Is she David Boddington? (at the weekend?)

Paul's on the money


She was an employee at RadioPlane, involved in
manufacturing radio-controlled drones


The photographer (David Conover) encouraged her to apply
to The Blue Book modeling agency. Norma Jeane Dougherty became one of Blue
Book's most successful models.

I liked that.
Any More ?

Brian and Paul, tou have far to much time on your hands. You should get a hobby

David Sargent wrote:Brian and Paul, You have far to much time on your hands. You should get a hobby

You could be right David
Sad isn't it.
It took me a bit of hunting round in google
starting with "target drone"
"denny"
"2 cylinder"
then it said marilyn monroe

I showed it Auntie Gladys
Immediate answer without the questions
"Marilyn Monroe"
Fashion model, Photographer, Holywood Used to be Norma Jeane Baker
Remember, you say "Yes Dear" up to a maximum of 3 per day.

David Sargent wrote:Brian and Paul, tou have far to much time on your hands. You should get a hobby

Ye maybe another hobby would be a good move

David Sargent wrote:Brian and Paul, tou have far to much time on your hands. You should get a hobby

My new organ * was installed last week.
So I'll play with that.

Have you decided what you will do Brian ?

you shouldnt play with your organ too much , i hear its bad for the eyesight!

Leigh wrote:you shouldnt play with your organ too much , i hear its bad for the eyesight!

Yeh. Thanks Leigh
You've seen it !
Makes people deaf too.
It's for when the weather's bad.
Particularly when I know you lot are getting drenched or blown away.

Anyway back to Marilyn in 1944
Found a bit more info
"Norma Jeane, while working in a factory inspecting parachutes in 1944, was photographed by the Army as a promotion to show women on the assembly line contributing to the war effort."

The target drone photo must have been another promotion.
Surprised me that they had drones even then. "Forsters Spark ignition" ..??
Wonder what the radios were like ?
Paul Q

For anyone that's interested a bit more about the engine in the photo.
It really has aroused my curiousity.
What's it got to do with model aircraft. Well a lot
Read on
Brian gave the clue .............it being associated with Radioplanes.
It is part of a whole series of engines developed just for target drones by manufacturer Rightson's in late 30's. They produced a range of singles, flat twins and flat four cylinder two stroke engines.
Some even had contra-rotating propellors. These proved to be no improvement.

Have a look at
http://www.ctie.monash.edu.au/hargrave/radioplane_engines2.html

There's all sorts of info about these beasts

It intrigues me the inginuity people had in those days. Long before I was even thought of.

So thanks Brian
Very interesting item