After what seems like years I finaly picked up my Trex 600n this morning, Just need to add my RX and were off, No finer way to get over a plane crash than to get a new heli

Bring on the mayhem

great news, so there was somthing you had to do today

Sounds good, I hope you got it for a bargain price?

How about tomorrow afternoon then? The forecast is for the wind to drop around 3pm ish, then it is just a matter of dodging any showers heading over! I may be ready to maiden (again) a certain yellow and red thing that snapped it's tail during an attempted blender last year

This time, I've put the tail in the bin though!

yeah i should be reet for then

I'll bring the MovingFilm Camera then, and so long as I leave it running, nothing dramatic, and worth of recording, will happen!

If you read this can you sent me over your pitch and throttle curves your using on the 600n, give me a base to start with

Hi Mark, sorry been away all day with my daughter in Manchester.

Mine is set up staticaly to give 0 degrees at centre stick with a spread of about +10 to -10 degrees at the extremes. This is set up mechanicaly with a straight line pitch curve.

Once this is achieved my settings are as follows.

this should give you around -6 to + 9 still with 5% in the middle so that nothging dramatic happens when you switch from normal to idle up 1.

I do use a rev limiter set to hold the head speed down at extreemes but these settings shoulds work.

They are very close to the ones in the Alighn manual.

Any queries give me a bell

Thanks Dave, most helpfull and as you say very close to the stock Align settings, but having flown yours in Idl1 id like it somwere similar 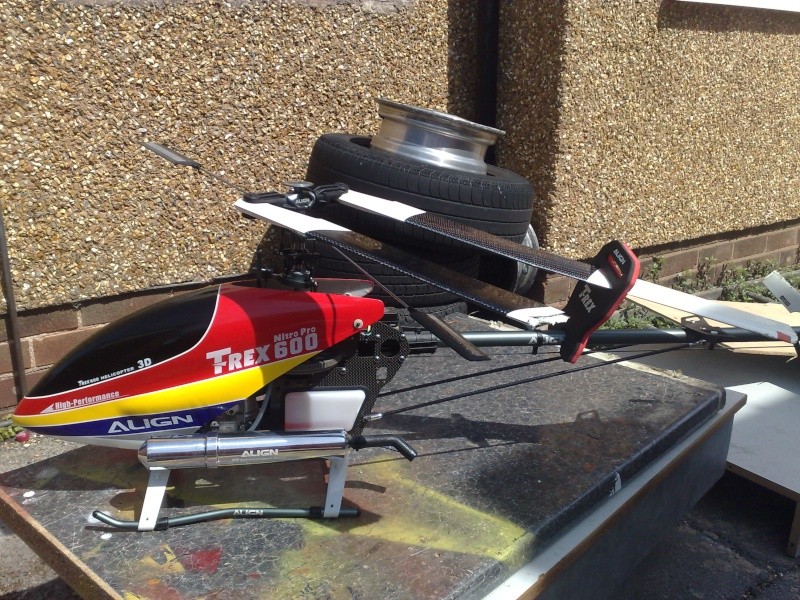 So all in all not 2 bad, this being my first real heli crash made me realise the diferance betwen a heavy fixed wing landing to a heli, Heli being alot simpler to fix (just buy the parts) but of course fixed wing its normaly a case of abit of DIY

also worth noting im now adding a header tank, as you can see in the pic theres still a fair bit of fuel in the tank but there was air in the line at the crash landing site,

So the general cencers of opinion is that when i went from full neg pictch to full positive for the climp out and push forward the the clunk has come out of the fuel and the time its taken to complete the curcit and pass infount of me the air has reached the engine!,

of course if i`d auto`d properly then all of this would be irelivent, maybe i should just go back to hovering

everything has now arived ready for instalation, further to the above ive got BBT carbon mains and SAB Tails, Canopy cover and a couple of other special bling bits

Will be ready to fook up again Friday!

MEthinks I should charge the moviefilm camera tonight then

What time you heading down the field?

Woooah, that sounds like a an ETA of someone who has a job to go to

So `rex all repaired bar the tracking arm

Right im back in the game thanks to Leigh,

It'll be a pleasure, don't forget the cash they have gone up due to the current economic climate

didnt catch you at the field mate but sure you heard about the misshap, lol, somday soon hey

no! not a crash if your already on the ground!