I'm just setting up the engine in my Trex 700 gasser conversion, and I could do with a bit of advice about plumbing the engine in. The Carb has got two connections, one is larger than the other. I assume the larger one is the fuel supply connection from the tank, and the smaller one is a fuel return back to the tank? The carb has one of the bulb type primer thingies on it.

I have a filtered clunk in the tank, so I'm not planning on running a seperate filter before the carb. I just need to decide on the best way to arrange the fill/vent arrangements for the tank. I assume it does need a proper vent in the tank that is open to atmosphere when running the engine? Also, would it be okay to T into the return line from the carb, to use as a "fill" connection when required? If I do this, should I clamp the fuel line going back to the carb to prevent any problems?

Using a t piece and clamp setup should work fine for refueling.
I can't remember which way round the in and return is as my gassers are in the shed at the moment and there is no light in there.I think you have it the right way round but I'll double check in the morning.
I know on both of mine the return line just pops into the top of the tank by a couple of cm's into a raised part of the tank that you can't quite fill up.
Almost time to maiden with all this sunny weather at the moment.

Do all your gassers have a vent built into the tank? Or do you run a vent "line" that is routed to minimise/eliminate spillage of fuel from the vent?

I think it'ds probably only on engines with a prime bulb to recirculate the fuel & to prevent fuel being spilt as you prime
_________________
The best pilots are the ones that practice most!

Is the second one the crankcase pressure line?

Hi guys. I'm pretty sure it is a fuel return from the carb, like Rich says. I've checked a couple of manuals like the HPI baja (where this particular engine was actually designed to go in apparently) and they show a fuel feed and return line.

The car tanks all have a screw top on, that incorporates a vent. I don't have that luxury, so I'll be tapping into the return line for filling, fitting a seperate vent line. Fingers crossed it will work okay

I've torn down the baja and the FG tanks and it's only the baja that's vented.The FG tanks are completely sealed.If you pull off both lines from the carb,put your thumb over one and try and blow down the other it's sealed.
The pipe closest to the bulb on the CY and Zenoah are the return.
Thinking on about the Align tank,I honestly think it will work fine sealed but if you were to put a quick uk header tank on,then when you fuel up just leave a little gap at the top of the main tank.
I have an idea.
If you were to T piece the top of the tank ( the pressure line) you could get a small shock absorber,say one from a Revo or even something smaller like an 18T associated.
If you remove the shock shaft and piston so you are left with just the body and cap.
The cap has a bladder in the top and if you were to put a pin hole in the bladder it would act like the Baja fuel cap.
You would just need to find a way to mount a fuel nipple to the bottom of the shock body.
I hope that made sense.
Sorry for the long post.

Ah, so you reckon the return line also pressurises the tank? In which case, a vent would be a bad thing?

Pesky engines, electrics are sooo much easier to setup, just plug them in, and so long as nothing explodes, it is good to go....

I'm with you on electrics.I hope Zaide doesn't read this.

Yeah I can't see it being a problem running sealed,should give a consistent fuel delivery.
By the way that's a cracking tan you've worked up there gringo.

Just been reading a JR Gasser instruction manual, and the Helifreak forum, and apparently the return from the bulb can be fed back to the tank, or to atmosphere, and that the tank should be vented to atmosphere too.

Apparently the primer bulb chucks excess fuel down it's return line if you press it too much. The main feed from the tank is pumped by the carb, and if there is no atmospheric vent, the tank collapses.....

Ahh,I understand.
When I prime both tanks I usually push untill I see a little fuel in the return,then it's ready to start.
Also on the FG the return line is around 2 foot long before it reaches the tank,so with that kind of length there is plenty of room for fuel to travel back down the return.
I wonder if I should switch to a vented cap on the FG then?
I know they made it that way but I'm all for improvement where improvements can be made.
So maybe a shock body and cap with a diaphram might work then to allow some venting?

I guess that if the tank is not collapsing at all, and the engine runs okay, then venting is not needed, or is provided for in the carb or similar, by way of the primer return? Air has to get in there from somewhere afterall....

The only real improvement would be to ditch the petrol motor, and install an electric equivalent!

The only real improvement would be to ditch the petrol motor, and install an electric equivalent!

Ha ha.You took the words right out of my mouth.
I can't talk though.After all I did pick the 700 nitro over the 700E.

Nothing wrong with it.I'm looking at mine right now.Very pretty,just like it's owner.

I presume this is petrol guy's ? If so you needn't worry about a vent the pumps in the carbs are strong enough to suck your tank down to the size of a nat's nadger, ask Rich he'll confirm it. That said it wouldn't be long term good practice for you tank to be sucked down to zip

Wish I could find a lass who could suck like a Walbro
Ask Zaide,I know he's quite into the whole leather gimp suit and a poolball in his mouth.
Just watch pulp fiction.

It is indeed petrol Bri. I don't suppose you know if it safe to T into the return line from the primer bulb, and use that conenction for re-filling the tank do you? It isn't going to flood the carb/engine/primer if I do that?

Personally I'd be a bit concerned about fuelling on that line. I'm not a fan of fuelling through "T'd" lines at all I'd far rather fit extra line/s to the tank. I see many people fuelling petrols through a "T" in the engine feed line which means every time you do you're flushing the muck from your felt clunk(a must in my opinion) back into the tank, not best practice in my book

I'd be T-ing into the return line from the carb primer though, so that just goes straight into the tank. I have a filtered pickup on the carb feed line though, to stop any much getting through.

I could fit a seperate feed line though, it just means buying another bung/fitting and drilling another hole in the tank somewhere.....

I'm not sure whether fuelling through that primer line would cause flooding or not Andy something I've never done. I did once have a 28cc Mc Culloch engine fitted with a primer bulb on the carb and I experimented with it running with said primer blanked off and it was not happy at all and had to re-instate it. Sorry I can't be more help

You could fuel up that way,but you will need a decent fuel clamp near the primer bulb so it only goes toward the tank.
I would personally go with the same type of plumming as you would if it was nitro.
This is how I do nitro's, 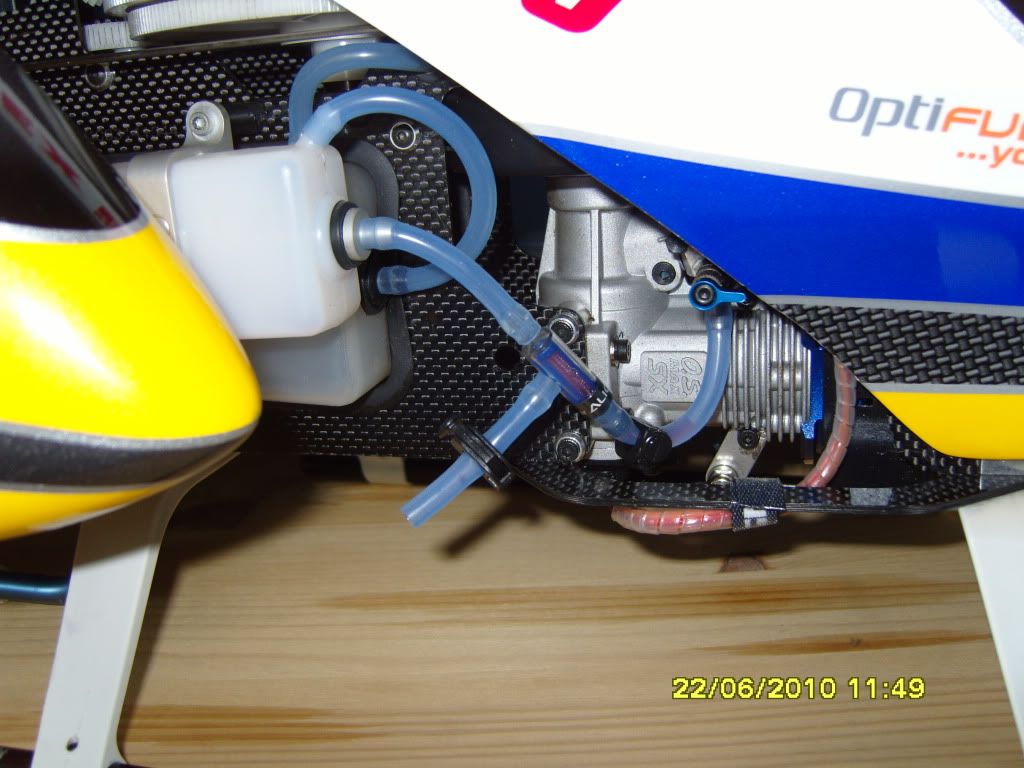 I would leave out the inline fuel filter as you have a filter in the tank,and put a T piece where I put a filter.
I'd use a stronger fuel clamp like the ones Traxxas supply in their cars.
On the 700 tank you have 2 places to put the fuel line through.I would use the one on the side and plug up the middle one because the side one is easy to access.
If you do it this way try a hand crank fuel pump for it's first filling so you can feel if it breathes while filling.On the nitro the pressure line going to the exhaust allows the air in the tank go into the exhaust allowing the fuel to go in easy.
Then if you feel some resistance you could either pull the top pipe off the main tank to fill or plan a vent to allow you to fuel up.