Just had notification from Parcelforce that they have the carb for my 3W 140 in their Deeside warehouse and it's just cost me another £22.09 in vat and handling fees to get it delivered tomorrow so given reasonable luck should be ready for a test flight soon

Yeh still cheaper than UK Mark and also I'm well lucky to get one at all as they're in short supply and even back ordered at the factory. The third place I tried in the States had 3 on the shelf. The niggle about the extra £22.09 is that £8.00 is Parcelforce's admin charge. Had to be done just keeping fingers crossed the engine produces the beans now

Somebody has to collect the Goverments cut.

I actually don't mind the VAT element of it (and any import duties that are applicable), what I do mind is the fact the the VAT is charged on the entire parcel value, including the shipping.

I can also see why Parcelforce have an admin charge (they have to file all the paperwork to HMRC after all, it's not just a case of taking a few quid off the customer, and job done, there are forms to fill in, and that takes someone's time, and that means having somewhere to park the person whilst they are working, heating lighting, etc etc, it all adds up).

Now what I do mind, is what the Government do with all the proceeds from VAT and import duty etc......

Andy (with his Devils Advocate hat on today

PS. good news on the Carb, let us know when you are going out for a test fly with it fitted

Just finished fitting it, took all afternoon, although it's a straight fit on the two studs, there's a lot of linkage and pipework changes to set it up for the model. For instance the new carb came set up for an external pulse line so I had to drill the new carb to suit flange pulse pickup. Too late to run it up tonight so I'll give it a ground run in the morning

After adapting and fitting the WB 25 that I got from Ohio I got round to running the engine here at home on I think Friday of last week. It started OK and had a good idle but whatever I did with the needles I could get no response above 1/3 throttle. This was worse than the original carb, so first of all I gave it a good clean wondering whether I'd left any swarf inside as I'd had to do some internal drilling before fitting. All to no avail still a massive flatspot above 1/3 throttle and signs of backfiring as well.
I then had a long chat with Rich on the phone and he said he'd pop over with some parts to try on the engine. He shortly arrived and the first off we substituted the entire ignition system with the one from his 111cc DLE, still we had a massive flatspot at high throttle the only difference being there was now no backfires down the exhaust which, bearing in mind at this stage we were running with the hall effect ignition pickup masking taped to the engine, we didn't take too much notice of. Finally just as it was going dark we fitted the carb off Richie's DA 150 which he had also brought with him. Literally with both of us wearing headlights we cranked it up and low and behold with little adjustment it ran like a raped ape.
So first thing Saturday I shot down to Richie's with both carbs and we stripped them to the bone and compared the two. Both externally were more or less identical but internally the DA 150 carb has been significantly modified so slowly but surely we set about modifying the WB25 to the same spec as the DA carb. Later on Saturday back at my place we refitted the now modified carb back on the engine, and we had in the interim also substituted reed block and gaskets etc. When we started the engine it was still the same nothing above third throttle. Rich then left me and I was to rewire the original ignition and re-fit the DA carb having done so the engine refused to start there was spark but it was just popping and backfiring. So now it's looking like two faults ie ignition and carburettion so a final check we refitted Rich's ignition and carb and again it was perfect so I needed an ignition pack and a DA carb.
I ordered an RC Exl ignition pack on Sunday night cost £59 from Innovative R/C compared with £204 from 3W and I ordered a DA150 carb from Toni Clark in Germany which fingers crossed may arrive tomorrow. The ignition arrived and was fitted yesterday.
As a footnote Rich took both carbs home and has found another difference between the two his DA carb having a much larger inlet drilling above the float needle than the WB 25 I bought. Rich is going to modify it and we'll then see if that works if not we have a scrap carb if it does the we have a spare carb to use or sell. A salutary tale I think you'll agree, both RIch and I have spent most of our lives doing engine diagnostics but this really was a barsteward

How frustrating and annoying that the new carb didn't work as you hoped even after throwing money at it. Looks like you and Rich are well on to way to solving the problem. Mind over matter ! eh.
"When your up to your arXX in mud and slime with crocodiles snapping at your bum, you forget that the reason you were sent there was to drain th swamp "

On a lesser issue....
I have given up on my McCulloch strimmer, it is now over 13 years old and refuses to behave any more. Worse, the new one from Aldi was supposed to solve the problem and it just wouldn't blXXdy well start. In desperation, I reset the neeedles to 1 1/2 open each and bingo it runs great.

It certainly was frustrating Paul, I'm just lucky that Rich had the parts to substitute to help with the diagnosis. I think I would have given up on the carb before Rich he went at it with the tenacity of a Pit Bull with a marrow dripping bone. Perhaps he'll get a result yet "watch this space."

I'm still amazed some of the bigger engines haven't moved over to fuel injection, instead of carbs. It's only a matter of time, you mark my words!

I can't see them going injection in a hurry Andy too much weight need a pressure pump injectors relevant plumbing some form of airflow measurement and and some sort of control over the injector/s to match fuel to airflow, and finally power source if talking electronic. If you can get all that within the weight of a Walbro carb go for it. If you do the Chinese will copy it and bring it to market for half the price

Injection pump, have you seen the size of the little dinky pump that my Wren 44 uses? tiny little thing about 40mm long and 18mm diameter. ECU can be tiny tiny, airflow meter? not needed, you can get away with a single air pressure sensor between a throttle butterfly and the engine, possibly another measuring ambient too. Power source can be the same as your existing ignition battery, and a dinky injector like the ones used on modern mopeds should work great.

I reckon there would be a slight weight penalty (based on todays technologies), but the performance benefits would be substantial I think. And it's not like the typical airframes the bigger engines are used in would notice a couple of ounces extra weight

Legislation over emissions will be the driving force in my opinion

Allan Patrick wrote:Legislation over emissions will be the driving force in my opinion

I forgot about that

Looks like this threads coming to an end, ran the 140 with the new DA carb and the RC eXL ignition in the garden just after lunch. Started real easy and was very easy to tune, it''ll probably need some more tuning once the cowls back on but that's a job for the field. It's running so strong I think I could tow the trailer to the field with it and leave the car at home

It's been a long hard furrow to plough and I must express my thanks to Rich for his help, got the right result in the end

So
A new carb from Ohio plus Parcel force subsidy
and DA carb from Toni Clark
and an RC. eXL ignition unit
Problem Solved

Dare I ask the total cost?
Say no if you like

Glad you got it sorted, not done to be defeated by a lump of metal

Er don't crash it now it can fly.

Quite right !
Playtime is now.

Result the Ultimate is now spot on, the engine is performing brilliantly, endless vertical terrific throttle response. Broke one rigging wire, frayed on the bracket, may do a temporary repair for tomorrow and re-think them over the winter. May also fit a bigger tank over the winter as I'm getting about 15 mins only on the 950mll tank but well delighted

John Bowman got a couple of nice flying shots of the Ultimate yesterday and one off me enjoying the rigging of it "AA style" as John put it. As usual with John the images are sharper than a surgeons scalpel 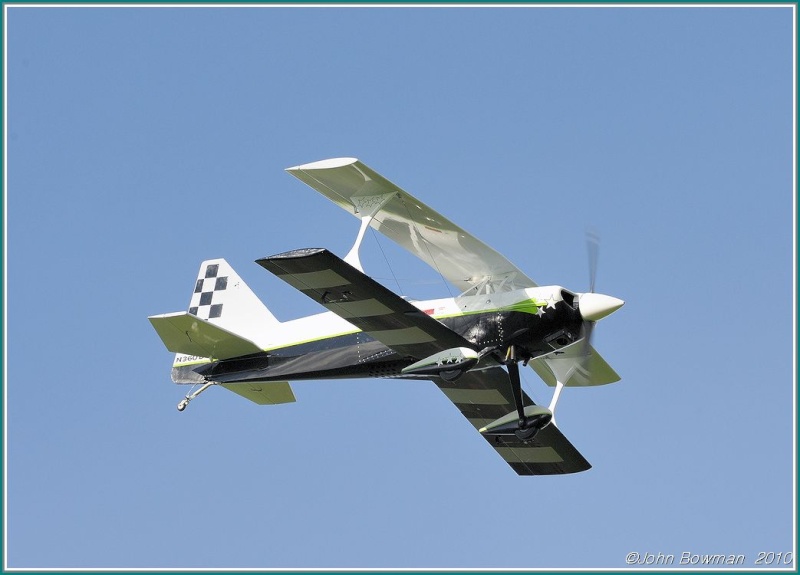 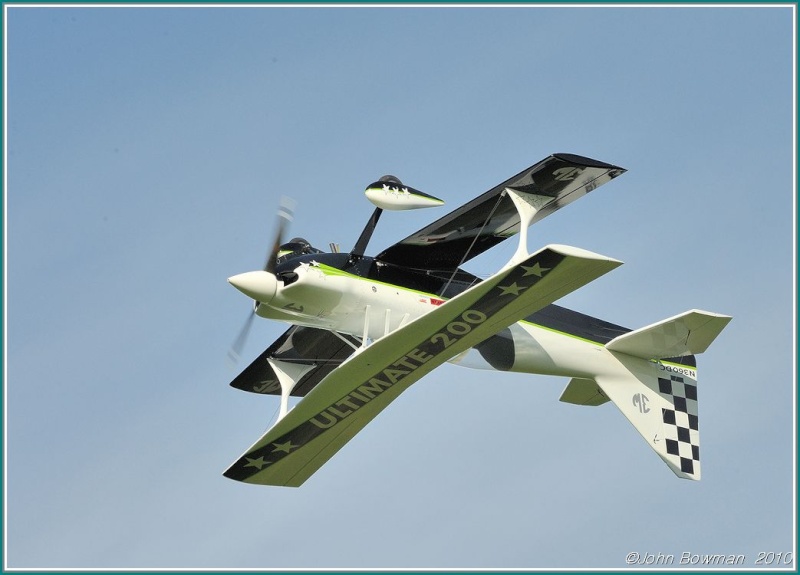 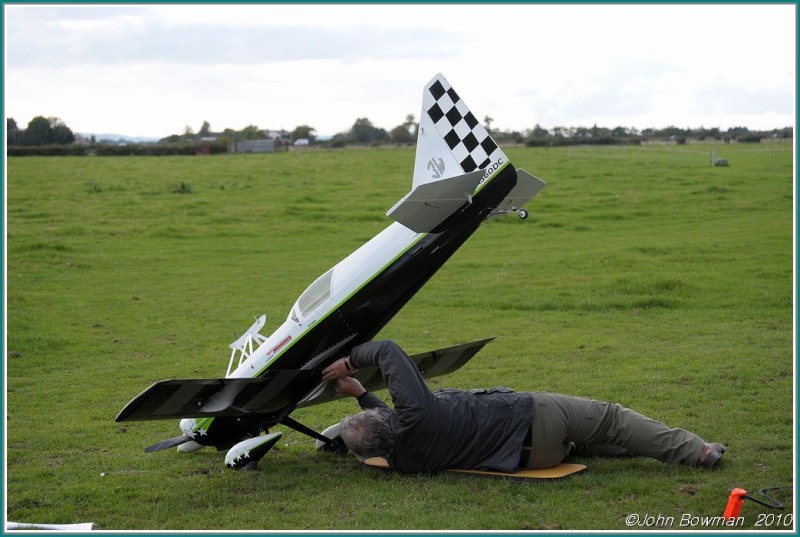 I must get some movie film before the winter sets in