Been busy again just in the final stages of tweakage, will be available soon......... 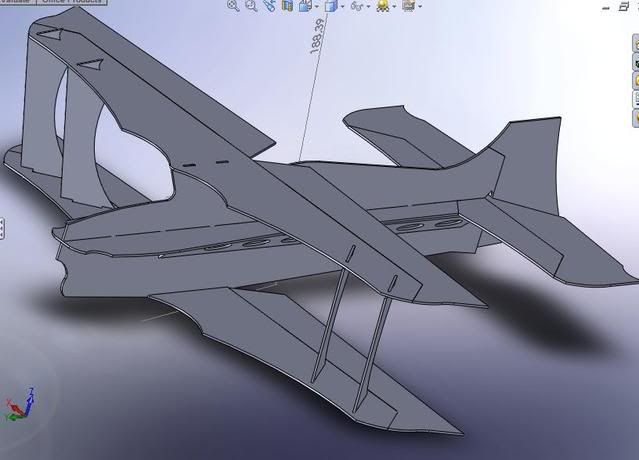 Designed primarily for 3d, but will include optional air brakes to slow down for f3p, pattern aeros.

Looks rather cool that Leigh. Is it just my tired eyes deceiving me, or are the braces between the upper and lower wing canted outwards somewhat? If so, do you think this will lead to a severe reduction in the yaw stability of the airframe (i.e. it will basically cancel out the stabilising effect of the side area of the fuselage and fin, and severely increase the effect of the rudder?)?

Think about it from the airframes point of view. If you put in a dash of right rudder, the plane will yaw to the right. The braces on the right wing will now present a bigger area to the direction of the airflow, adding to the moment that is causing the yaw to the right. The braces on the left wing will do the opposite and present less area to the airflow, and reduce their contribution to the yawing moment. Both these will result in increased response to rudder inputs. If the areas and moments involved are significant enough, it may lead to negative stability in yaw. I.e. you put a dab of rudder in (or a gust of wind disturbs the planeabout the yaw axis), and the yawing action will get worse and worse...

If you canted them inwards, you would find the opposite true, i.e. the yawing action would be damped even further, reducing the effect of the rudder....

Something to think about (and let me know how it goes!) anyway.. Now, where is the "caution, severe Geek alert!" smiley when it is needed...

PS. don't forget it is hard to say exactly what will happen without pages and pages of calculations, most of which I can't be ar$£d to do when it is past my bedtime, on a school night too!
_________________
Chicks dig slop free linkages....

wel andy since its a 3d machine i was after controlable instability, i was hoping for a shocky that can snap. i canted them mainly to increase and direct airflow over the tail surfaces. i also thought about adding turbulators to the upper surface of the top wing and lower surface of the bottom one. whats your thoughts on that? is it worth it with flat plate wings? will get one knocked up as soon as i can and we will find out.

Controllable instability is the way forward! Actually, no, wait, that's Steam power..... heh heh! The canted outwards will certainly help with the instability bit, but by doing it this way you may find it a little bit too unstable in Yaw. The best thing to do (I reckon) would be to try the braces at several different angles. That way you should be able to tune the yaw response somewhat, and in case the angle is too big (and you end up with a diverging control response, i.e. you apply a bit of rudder and all hell breaks loose) you can back off a bit.

The directing airflow over the tail is going to be a very minor side effect that that I doubt you would be able to notice really. The tail surfaces already have the propwash over them, and as the forward airspeed on shockies is relatively low, it isn't going to add much to it at all. You would be better increasing the area of the rudder if you want more control authority.. That said, the effects I described in my first post will come into play, and this will have pretty much the same result as increasing the rudder area (so long as you get the angles right!).

As for snapping, don't forget that a snap roll doesn't just rely on the yaw response being particularly good, it also needs the pitch response to be nice and crisp, bordering on unstable too. That said, the canted out braces would help here....

Regarding the Turbulators, then at the airspeeds we are talking about, and the geometry of the wing (i.e. Flat plate) they are going to have pretty much no effect at all. They tend to be used in situations where you want to promote the adhesion of the boundary layer by making the boundary layer nice and turbulent (I need a blackboard, some red and white chalk and about half an hour to explain that one!). Generally this is only any use for a fairly specific set of airflow conditions (usually in high G conditions on Full size planes), and even then it is only to fine tune the aerodynamic perfomance of the wing (or control surface etc). The aerodynamics of a flat plate wing would only really respond to a turbulator at a very specific angle of attack, and on a shocky this would be somewhere between "pattern" type flight (i.e low angles of attack), and 3D type flight (i.e. very high angles of attack). In other words, it would be right where you hardly ever fly, right at that transition from the low angles of attack to moderate angles of attack.

I know it probably goes against the rules of Shockies and that, but I think the best approach for acheiving a wildly controlable airplane, is to seek assistance from our electronic friends, Gyros. If you edge the CG back bit by bit, you will find that you get to a point where the aircraft is too unstable for a human to control. The control response is lightning quick at this point, and your reactions will not be able to keep up when it comes to smooth flying. A side effect of moving the CG back, is that less control throws are needed for extreme pitch/roll/yaw rates (thus acheiving the "instability" you are after. in order to tame this back down again though, and enable it to fly smoothly too, you just put a rate gyro on each axis. That then is able to tame things down when you need smooth flight, but allows things to get a bit mental when you need it

As with all things in aircraft design, it a load of compromises. You make it more responsive to fly, and it becomes less smooth. You smooth things out and it is not as good at manouevring, you improve low speed flight characteristics, the high speed flight behaviour suffers....

Blimey, that was a bit heavy going for a tuesday morning!

Give your keyboard a rest Andy

The keyboard knows who is boss around here, it knows not to expect an easy life on a Tuesday....

How do you thin my brain feels? It has to live with all this sort of (almost) useless information, facts and colours floating around inside it, day in, day out.

You missed the bit of the end Mark,

I know you like poncing around Andy so why not get that blackboard & several colours of chalk & do a quick presenation at one of the club nights, I'm sure that will stop most of us going to sleep

That could be a good idea that Rich! Methinks it would need to be condensed into less than 10 minutes to keep you lot awake

I know what your 10 mins are, they appear to be a lot longer than mine, I was thinking more along the lines of about 30 secs, that should just about give you time to say hello goodmorning & welcome..!!!

Time is dependant on your frame of reference anyway, it's all relative*

No, I think I shall hold you to that, and at an undetermined club night in the future, I shall do said presentation, and you shall thoroughly enjoy it!

Totally unrelated, I've only just got your Avatar picture! It's taken me ages to realise it a glider being towed!

And another thing, I now see what the RBLH stands for!

Suddenly the nickname my workmates have given me is starting to seem rather apt....

design engineers never look at the simple solution do they Andy, its a Wilga towplane as well

I have to justify my job somehow. Skipping the simple solution = more work for Andy!

still waiting for that nickname

that's a horse, what you saying