Make sure you fly your prop through Mario Balotelli's head. He could do with another stupid haircut

Good luck today Mark - dont have too much more beer - dont forget most of the western hemisphere will be watching you!

I saw the models flying, one red and one blue but they didn't show anymore footage of who was flying them.

I Sky+ the game...It was right at the start, did ya see all the crowd pointing at them in amazement, Like i was..

Sky +ed the highlights from ITV1 but not seen it yet - hope its on there!

Just back from the best Weekend of modeling Ive ever had. More updates with lots of vid and pics to come. 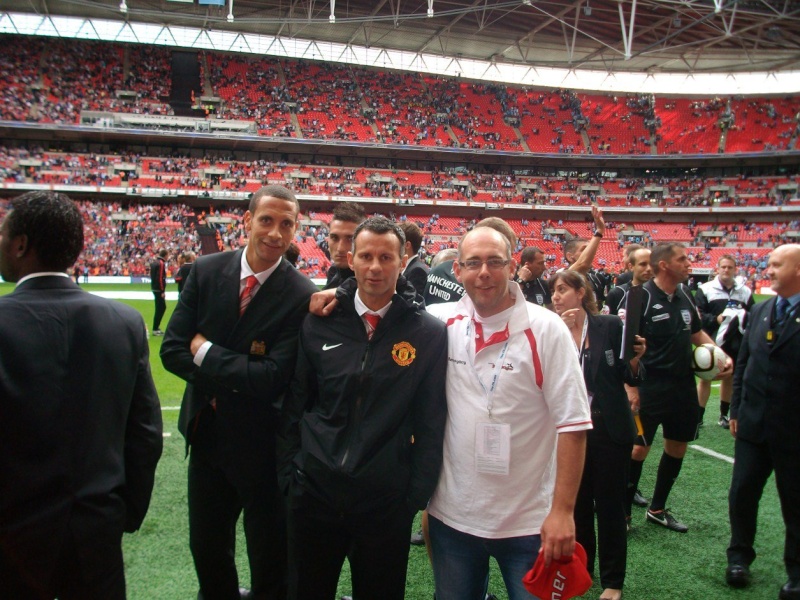 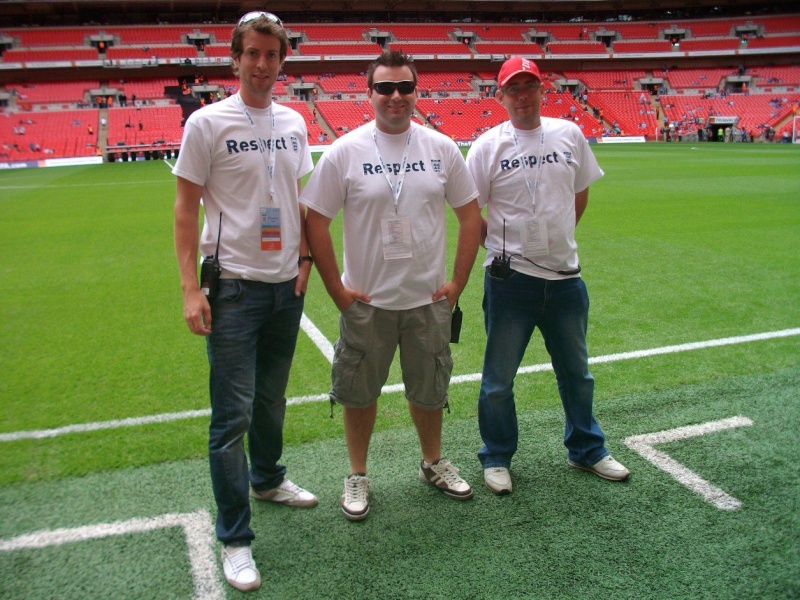 Mark Barnes wrote:Just back from the best Weekend of modeling Ive ever had. More updates with lots of vid and pics to come.

So, it was good then mate?

lol
I'm pleased for you, I would of been chacking myself!
I Vote that Mark gets the "Biggest Brass Balls" award!

Marvellous. That grass looks in better condition than my living room carpet!

Especially the one in the white shirt

Looks like you might of enjoyed it then, did you manage a flight, was that classed as indoor or outdoor
_________________
The best pilots are the ones that practice most!

I hadn’t realised that Mark had posted this thread till I saw him on Saturday. The story of the RCSuperhero is Greg Tanous in the USA has been developing the model for some time and sent me the plans to build one as the European distributor earlier this year. It is made from Depron and Coroplast with carbon fibre rods, fitted with a Scorpion 111kv motor and all up weight is just under 4 lbs. Take off originally designed as vertical from a pole. This is at the Wembley stadium last month just before I flew doing the Health and Safety certification in front of the stadium officials, FA executive, health and safety executive from a number of people including the local council who had the final say. They had a copy of CAA CAP 658. All were pleased with my flight and signed it off as “good to go” with one proviso that a final Health & Safety flight would be made on the Sunday morning of the actual routine involving two models representing the teams. This was the first time the RCSuperhero was flown in Europe. 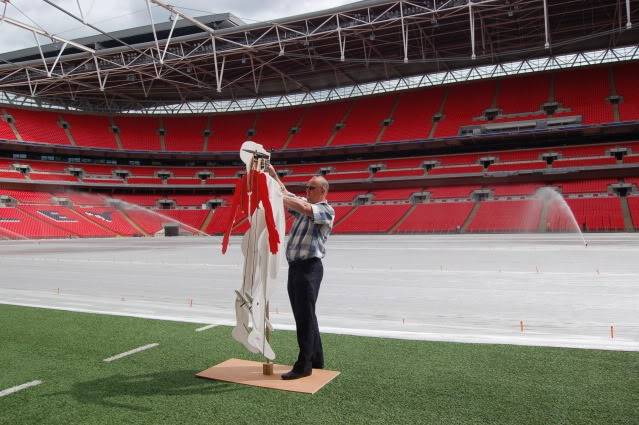 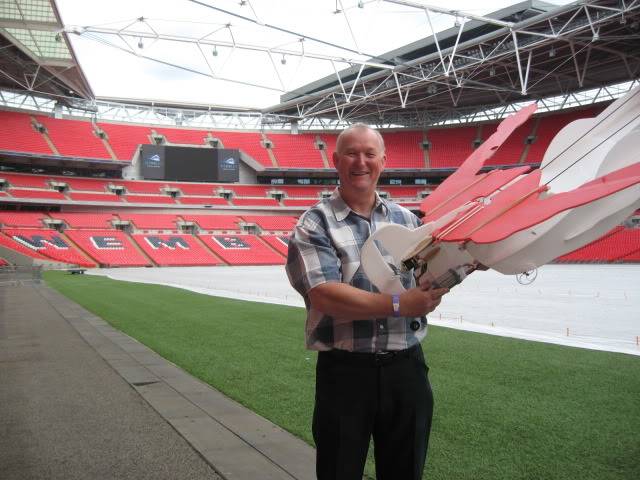 As it happened it took the FA some time to confirm the actual details they wanted 12 days before the event and how many RCSuperhero’s they wanted built. Originally 4 but cut down to 2 and some wrangling over the colours being decided as all blue and all red, rather than in full team colours as life like players (something to do with marketing licence rights). In the meantime Greg had upgraded the head as this model spot lands and sent by express air mail (I’m glad I wasn’t paying the shipping charges) two kits to build and source the running gear within 10 days. Got there, but a lot of midnight oil was burnt. 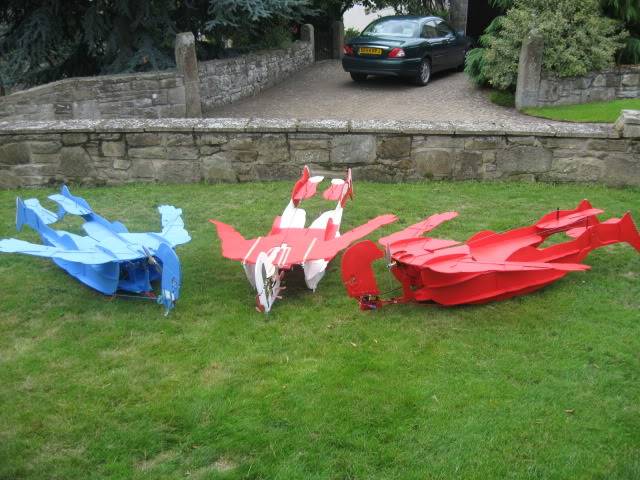 The original prototype is in the centre with additional red paint markings and two new versions with stronger heads and did they need it. I know Mark has some great photos and video. We had a great time and honoured to be allowed onto the sacred turf on more than one occasion. The FA really looked after us and provided us with “go anywhere passes” which we duly did. The final score was 3 divots without being hanged by the head groundkeeper and scratch one RCSuperhero.

As it happens I won’t be distributing the RCSuperhero kits which have to come direct from the supplier in the USA or you can just buy the plans and source your own Depron etc. The RCSuperhero is for private use only and is now being licensed in the USA for world wide commercial use, as it had generated a lot of publicity enquiries and I have taken over as the European events organiser with initial orders for 2012 in Rotterdam, Paris and a number of other serious enquiries including Saudi, some hinging on the success of Wembley. Will RCSuperhero be in London 2012?

Amazing what you can do in Photoshop these days!!

Rio looks as though he's never seen a camera before.

More pics are begining to fillter through now so prepare to be bombarded lol first vid is going on youtube now too, (only got 3.2gig of vid) and Andy Rigby has been onto Sky TV today and they are sending all the HD footage they have to him on a DVD - How cool is that.

Thanks once again to Richard T for the opertunaty to do this it was trulley stunning! 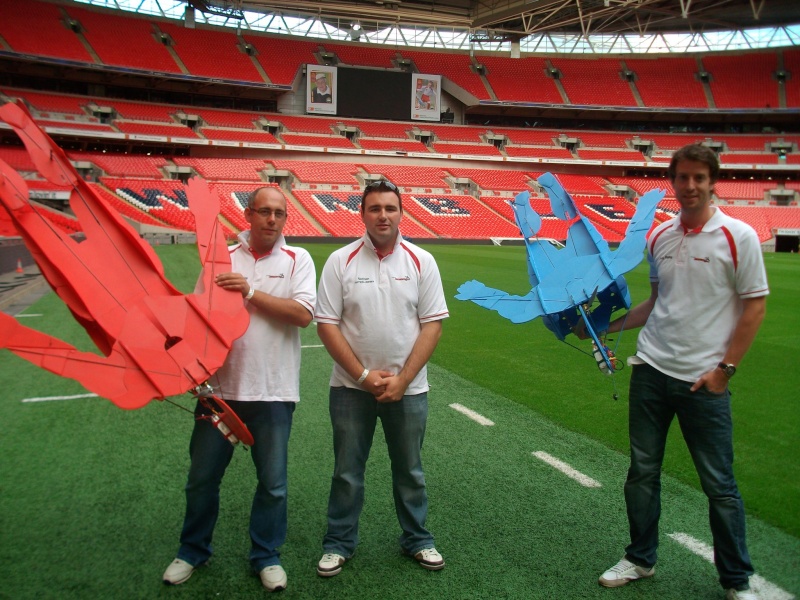 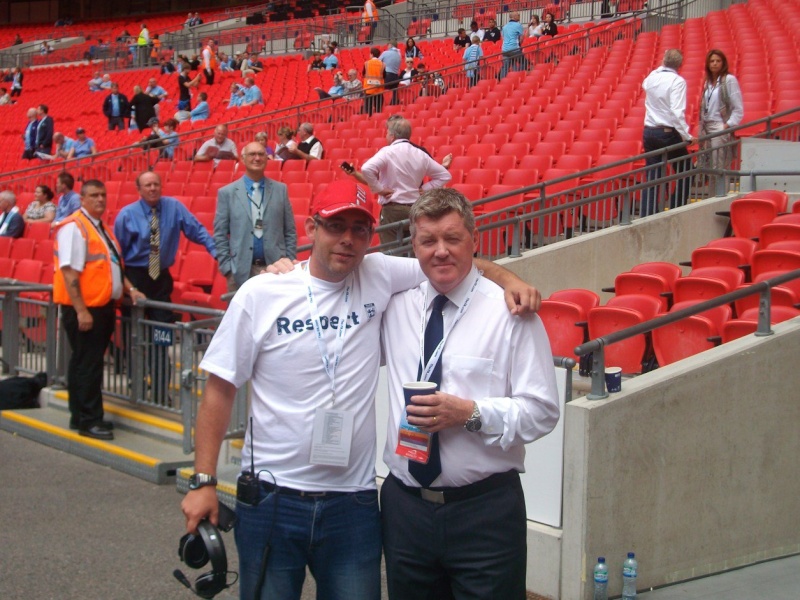 Me and big Geoff

Then some other guys butted in 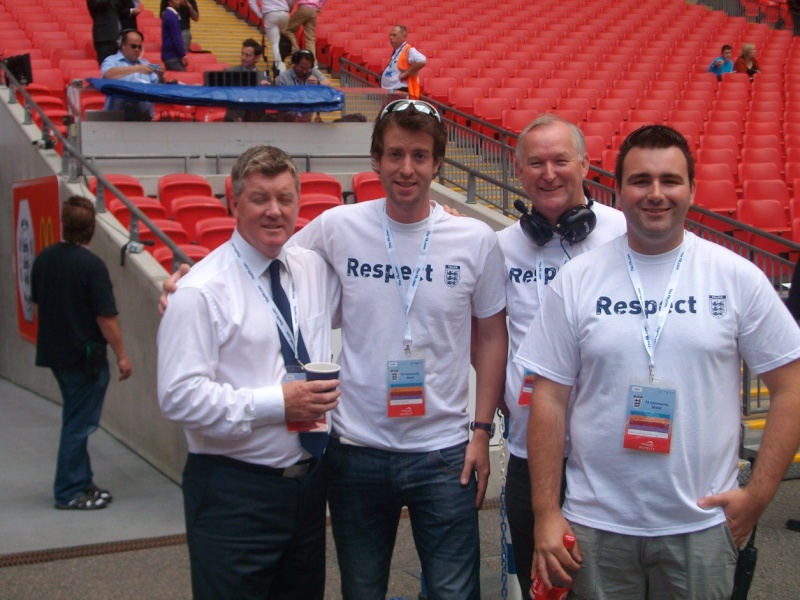 There are some links to vids in "Media" forum but this one donated from the SkySports master tape is .......